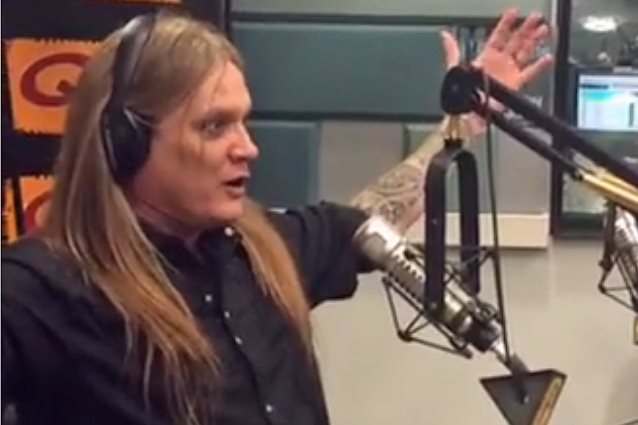 Former SKID ROW singer Sebastian Bach promoted his long-awaited autobiography, "18 And Life On Skid Row", with an appearance earlier today (Monday, December 5) on the Q104.3 radio station in New York City, where he was interviewed by Jonathan Clarke. You can now watch video footage of the question-and-answer session below.

Speaking about his reaction to this year's partial reunion of GUNS N' ROSES' classic lineup, Sebastian said: "I spent a lot of years in the late 2000s opening for GUNS N' ROSES without Slash — we played Madison Square Garden and the Meadowlands, and lots of tours all around the world — and me and Axl [Rose] would hang out at night and drink and party and talk. And he would always have stuff to say that he was disgruntled about about GUNS N' ROSES, but at the end of the night, as I was always leaving, there would always be, like, a 'Never say never.' [Laughs] And I'd go, 'Right on!' So he never cut it off. So I was very surprised when they reunited, but part of me, in a little bit of a way, was expecting it some day, but I wasn't expecting it this quick. But, again, the public demands it. That's the number one tour; I mean, that is the biggest tour."

The 448-page "18 And Life On Skid Row" book is due on December 6 via Dey Street Books (formerly It Books), an imprint of HarperCollins Publishers.

Regarding why the release of "18 And Life On Skid Row" was pushed back by several months, Bach told the Rock 100.5 The KATT radio station earlier in the year: "It [was] delayed because it's a very big project — six hundred pages with lots of pictures. They asked me for thirty pictures; I gave them a hundred and sixteen. And I'm, like, 'It's my book, dude.' [Laughs] It's got a lot of stories of crazy shit that I did. But there is a beginning and an end to it, like a story arc, because my life was very weird."

Bach also revealed that he "wrote the whole thing" himself without the help of a co-writer and mentioned recent books by Keith Richards (THE ROLLING STONES), Paul Stanley (KISS) and Duff McKagan (GUNS N' ROSES) as ones that he found particularly interesting. He said: "I love [punk rock icon] Henry Rollins's writing. If my book had any kind of the power of that, I would be honored. 'Cause the way he writes is very impactful. Every paragraph, you wanna read it over and over."

Asked what was different about branching into the literary world compared to being in the music business for so long, Bach said: "You still have to fight for what you believe in and stick up for what you think is cool. Dave Grohl [NIRVANA, FOO FIGHTERS], he said one of the biggest things in rock and roll is you have to learn how to say 'no,' because there's always people trying to get you to do shit that's not cool."