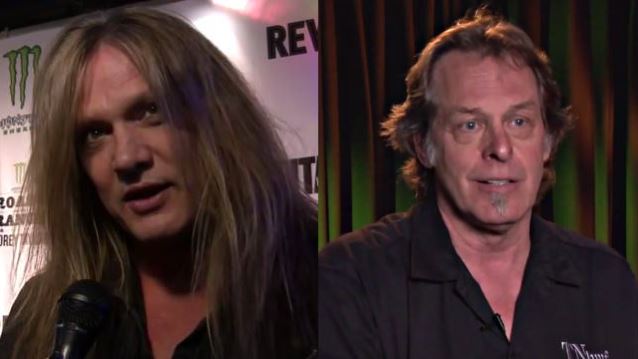 Former SKID ROW singer Sebastian Bach has apparently responded to Ted Nugent's recent comments about him in which the legendary rocker described Bach as "incredibly gifted… but… weak."

In an interview with Radio.com, Nugent stated about Bach: "I love the guy, he's incredibly gifted, a gentleman for the most part, but he's weak. He's weak. And he doesn't understand the concept of the [body as a] Sacred Temple. He doesn't understand accountability. He doesn't understand — clearly — how his indulgences and his poisons ruin his life. And his relationships, and his marriage. And his musical capabilities. I love the guy and if he's watching this, I love you, but when you're the drunk Sebastian Bach, you're nowhere near the Sebastian Bach that you are when you're clean and sober. Case closed. That isn't a Ted Nugent opinion, that's scientific truism."

After Nugent's comments were posted on BLABBERMOUTH.NET on Friday, Bach took to his Twitter account to write: "Being a racist is fucking weak."

Nugent has consistently denied that he is a racist, explaining back in a 2003 statement: "Throughout my 40-year career in the media, I have constantly praised the long list of black musical influences that shaped me as a young musician and continue to inspire me today. Furthermore, I have hired blacks and Mexicans to play in my band. Yet I'm a racist? I'll admit I'm a racist when you admit that one plus one equals seventeen."

In a 2012 interview with Metal-Rules.com, Bach stated about Nugent, with whom he appeared on "SuperGroup", the 2006 VH1 "reality" TV program also starring ANTHRAX guitarist Scott Ian, ex-BIOHAZARD bassist/vocalist Evan Seinfeld and drummer Jason Bonham (LED ZEPPELIN, BONHAM, UFO, FOREIGNER): "To be honest with you, I think that Ted's political beliefs and social opinions overshadow how great a guitar player he is. More people know Ted for his outrageous views and political viewpoints. His music is so great, but a lot of people are disgusted by him. They don't like guns. People don't like racism, but he says some things that are from the Fifties. People don't think like that anymore; it's not acceptable. It's a shame because I love his music and he is funny as hell. He is so abrasive with his beliefs, it takes the fun out of it."

Being a racist is fucking weak