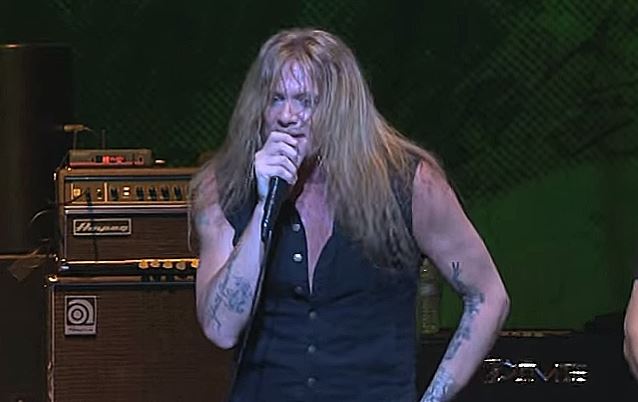 In a brand new interview with SiouxCityJournal.com, former SKID ROW singer Sebastian Bach urged fans to keep their cellphones at the bottom of their pockets and just watch the performance when they come to see him next week during his June 20 concert at Awesome Biker Nights in Sioux City, Iowa.

"Be in the moment," said Bach. "You're distracted and it's distracting to the performer as well. Like, put your fuckin' cellphone away, dammit! You're never even going to watch that footage."

Bach went on to lament the fact that, according to T-Mobile, 47 percent of any given audience text others during a concert, while 32 percent engage in social media during a show. As a result, every single performance could be recorded and shared on YouTube almost immediately.

"If I go to a wedding and sing a song, it's on Blabbermouth the next day and everybody analyzes it," said Bach. "It's a really backwards way to watch a band. It's a drag sometimes when I go up there and the first thing I see is everybody getting their phones out and holding them toward my face. It makes you feel intimidated."

Bach said that he finds it impossible to stand still while singing in concert because adrenaline takes over, leaving him open to criticism by making it difficult for him to deliver pitch-perfect performances.

"I try to tell myself that but I can't do it," said Bach with a laugh. "The music gets in me and I want to move and jump. I don't want to stand there frozen like a tree and be filmed."

The singer recalled a VAN HALEN concert he saw where the band's frontman, Dave Lee Roth, "went out and yelled, 'I forgot the fuckin' words!' And we're like, 'Yeah! You forgot the fuckin' words!' We thought it was the greatest thing ever. We thought it was cool." In today's social-media world, however, such a faux pas would cause an immediate and swift backlash. "Give me a break," Bach said. "It's supposed to be fun."

In a 2013 interview with Metal Assault, Bach was asked how he manages to always put the same kind of energy into performing the SKID ROW classics, even after singing them live for the past 25 years.

"I just love music," he responded. "It makes me feel good and there's nothing like it in this world. So I've always really been into it. I want to keep making music until I'm not able to anymore. When you talk about the energy I put into running around on stage, I might run around a little less as the years go on, and sing standing still a little more. [Laughs] But I don't know if that’ll even happen, because when I get up there, the music takes me over and I just explode with energy. So it's hard to control."