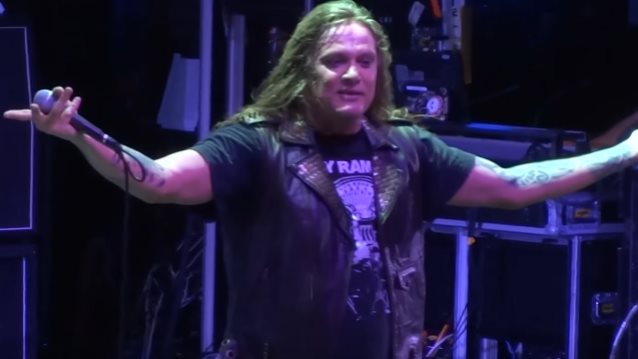 Prior to launching into the track, Bach stated from the stage: "You know, there's been a lot of guys who've said they're in the band SKID ROW, and 99 percent of them are full of fucking shit. There's five guys in the band SKID ROW; everybody else is a fucking hack. This is the drummer from SKID ROW, Rob Affuso. My name is Sebastian fucking Bach; I'm the singer on the fucking albums."

Affuso said earlier in the year that he would "love to see" a reunion of SKID ROW's classic lineup, telling Canadian journalist Mitch Lafon: "I am friendly with all four other guys. I've worked hard at it. I spent a third of my life with these guys and I felt that I shared an immeasurable amount of things with them and they will always be very, very dear and important to me. Human relationships are very important to me. Those relationships with these guys were very important, so I've tried to nurture the best I can with each of them some form of relationship, however it looks. As far as everybody… I'm really not in a position to talk about that. I think everybody has had their piece and their say, and I think that there's things that probably should have been said a long time ago and weren't. And, you know, I'm not sure if I'd ever… I'd never say never, but, you know, I mean… I would certainly love to see it, but we'll see what happens. I don't know."

Bach also said that he would be open to a reunion of SKID ROW's classic lineup, explaining: "I have no animosity towards anybody in SKID ROW, and the fact that we're all, five of us, still alive in this world is a pretty amazing feat. So I would someday definitely like to hear the five guys who made those records play live together again. Yes, I would. 'Cause I'm a fan too."

Singer Tony Harnell announced his departure from SKID ROW last December, eight months after he joined the band as the replacement for Johnny Solinger, who was the group's frontman for fifteen years.

SKID ROW has played a number of shows in recent months with the South African-born, British-based singer ZP Theart (DRAGONFORCE, TANK, I AM I), but he has not been officially named as the permanent replacement for Harnell.

Despite the fact that fans have been clamoring for a reunion of SKID ROW's most popular lineup for nearly twenty years, guitarist Dave "Snake" Sabo told The Aquarian Weekly a few months ago that SKID ROW had no intention of reconnecting with Bach. "Happiness, to me, is my spirit and my soul is more important to me than having dollars in my wallet," he explained. "People may [not] believe that and that's okay. Anybody who knows me knows that to be true. I don't think you can place a price on happiness. We've been hit repeatedly over the years with, 'Why don't you do a reunion tour?' And you know what? I understand the question and I get it. I really do, and if I were on the outside, I'd be asking the same question, but no one feels comfortable with that idea."