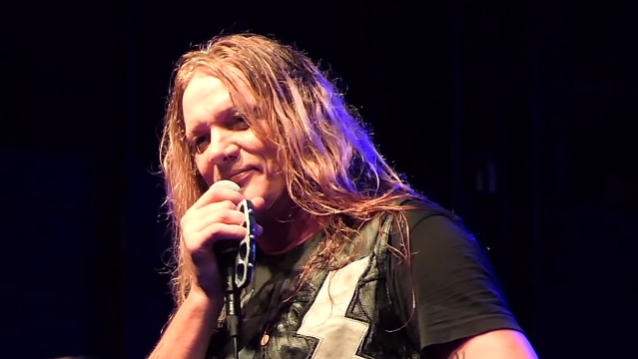 Former SKID ROW singer Sebastian Bach says that he has "nothing to do" with the latest "Forever Wild" vinyl release bearing his name.

Originally issued on DVD in 2004, "Forever Wild" includes concert recordings from 1998 at the Whisky A Go Go in West Hollywood, California. The DVD features Bach's takes on classic SKID ROW tracks like "Slave To The Grind" and "18 To Life", as well as a cover of the KISS song "Parasite".

In response to the news of the record's arrival, Bach took to his social media earlier today to write: "2019 will be remembered by me as the year I put records out without knowing anything about it. For the second time this year, I have discovered that I am releasing a new record..... by reading about it on the internet. Without my knowledge, input, permission, or approval, today's mystery release on record store day is Sebastian Bach 'Forever Wild' Double Live Vinyl Album. I have never heard this vinyl release or seen it before. But I will tell you this: the source audio for this record is a VHS tape! Did not know that was possible to make a record out of a VHS tape. One has to chuckle at a sticker that says '180g Virgin Vinyl' whatever that is. That's great that it's 180 Gram *Virgin Vinyl" but there's a saying in the music business: 'Shit in, shit out'. I can guarantee you that the source audio for this record was not virgin VHS tape.

"I made the 'Forever Wild' DVD many many years ago out of one single VHS tape recorded live at the Whiskey in 1999 I think," he continued. "Never was that DVD intended to be a live double record. There are zero overdubs on this release because it's impossible to overdub on a VHS tape! So please realize if you purchase this release, it has nothing to do with me. Please realize that whoever the genius was that took it upon themselves to put this out never even had the respect to contact Sebastian Bach about a Sebastian Bach release. If it sounds great to you, well that's wonderful but I can tell you if it was up to me, I would make it sound like a proper album since it is going into stores under my name. Just like the other release earlier this year, I do not enjoy that level of respect.

"So Happy Record Store Day and enjoy a vinyl record made out of a VHS tape. Fingers crossed hope it sounds good. I can guarantee you the next record that I put out, that I have something to do with, will sound good on your stereo."

Earlier this year, Bach said that he was about to sign a new record deal for his upcoming solo album. The disc, which is not expected to arrive before mid-2020 at the earliest, will feature contributions from several well-known guitarists, including John 5 (ROB ZOMBIE, MARILYN MANSON), Steve Stevens (BILLY IDOL) and Orianthi (ALICE COOPER).

Bach hasn't released a full-length disc since "Give 'Em Hell", which came out in 2014.

2019 will be remembered by me as the year I put records out without knowing anything about it. For the second time this...