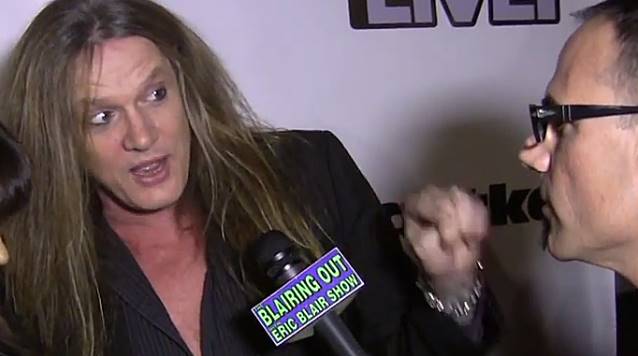 Eric Blair of "The Blairing Out With Eric Blair Show" conducted an interview with former SKID ROW singer Sebastian Bach at the Bass Player LIVE! Concert & Awards Show, which was held this past Saturday night (November 9) at the historic Fonda Theatre in Los Angeles, California. The concert honored heavy metal legend, BLACK SABBATH's Geezer Butler, and featured an all-star band of rock luminaries performing BLACK SABBATH songs as a tribute to Butler. The performance culminated with Geezer joining the band for the finale.

Asked if he got the feud with MÖTLEY CRÜE bassist Nikki Sixx "worked out," Bach replied: "Here's the thing… You are talking to probably the biggest MÖTLEY CRÜE fan in the world. So, you know, when you wake up and it's, like, 'I never fucking said that.' It's, like, 'Well, bullshit. Actually ,you did.' Here's the thing…. I'm not making anything up. I'm not that devious. I don't have a lot of time. I'm kind of busy. But how much fun was that on YouTube when that [old MTV] interview [with Sixx and Tommy Lee] surfaced? [laughs] Did you see that? Oops! [laughs] Maybe I could be referring to that!"

He continued: "Here's the thing… When he comes out and goes he never said that or anything, I think he's talking about me like the 14-year-old MÖTLEY CRÜE fan, like, in the front row. I'm, like, a 45-year-old man now. It's, like, 'OK, dude. Well, I know we're into that whole 'out-in-the-playground' kind of thing, but I'm not 14 anymore, so..."

After Bach revealed in a a three-word tweet to a fan on August 29 that he was asked to join MÖTLEY CRÜE more than two decades ago, Sixx quickly retorted that Bach's version of events never happened. Sebastian then took to his Facebook page to describe in some detail the circumstances behind his being asked to join the CRÜE, which included taking part in a full day's rehearsal with the band and a slew of phone calls between various managers, agents and label executives. "I was driven to rehearsal by Tommy Lee, and I spent a full day singing the MÖTLEY CRÜE set with the band MÖTLEY CRÜE," Bach wrote. "I remember the songs that Nikki asked me to sing that day. I remember the whole road crew's ecstatic reaction to us jamming together all day. And I remember Nikki's very generous, kind offer, at the end of our rehearsal, for me to join the band MÖTLEY CRÜE. I remember his exact words that he said to me in front of his whole road crew, Tommy and Mick [Mars] as well. It's not every day that your hero asks you to join his band."

On September 13, Nikki tweeted what appeared to be a short response to Bach's online rant: "Someone needs attention to try and sell some books." He then added: "I always liked the term 'washed up.'"