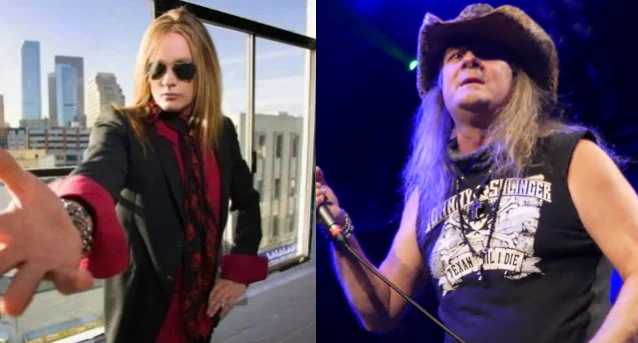 Sebastian Bach has offered his condolences to the family of Johnny Solinger, the singer who joined SKID ROW three years after Bach was fired from the group.

Solinger, SKID ROW's longest-tenured frontman, died on Saturday (June 26) at the age of 55. His passing came more than a month after he announced that he was suffering from liver failure.

Earlier today, Bach, who fronted SKID ROW until 1996, addressed Solinger's death in a tweet. He wrote: "My condolences to the family & friends of Johnny Solinger the singer who replaced Sean McCabe in SKID ROW. Only contact I had was back in 1991 or so years b4 I was kicked out in 1996. Awkward to wake up to headlines 'SKID ROW Singer Dies' some using a pic of me. Sorry 2 hear".

After Bach was fired from SKID ROW, the remaining members took a hiatus and went on to play briefly in a band called OZONE MONDAY with vocalist Sean McCabe. In 1999, SKID ROW reformed and, after a bit of shuffling over the years, featured a lineup consisting of bassist Rachel Bolan and guitarists Dave "Snake" Sabo and Scotti Hill, alongside drummer Rob Hammersmith and Solinger.

Shortly after BLABBERMOUTH.NET published this story, Sean McCabe — also known as Shawn McCabe and Shawn Mars — took to Facebook to dismiss Sebastian's suggestion that McCabe was ever a member of SKID ROW, writing: "Actually Sean (Shawn) never sang a SKID ROW song and fronted a band called OZONE MONDAY that included all members except for Baz...I know cuz it's me...RIP Johnny...very cool guy!"

In July 2012, Bach posted a letter on his Facebook page in which he said he was willing to reunite with SKID ROW. He said he wanted to write the letter in response to Solinger's interview in which Johnny said a tweet by Bach about a possible SKID ROW reunion was an attempt to "get attention."

Solinger reportedly married actress Paula Marcenaro in 2011. She broke the news of his death on Saturday, writing: "Johnny has passed. I was holding his hand. He went in peace."

My condolences to the family & friends of Johnny Solinger the singer who replaced Sean McCabe in Skid Row. Only contact I had was back in 1991 or so? years b4 I was kicked out in 1996. Awkward to wake up to headlines 'Skid Row Singer Dies' some using a pic of me✌️Sorry 2 hear ?

Very sad when someone dies my condolences to his family and friends. He actually replaced Sean McCabe in Skid Row not me. Hard to wake up with headlines saying Skid Row singer dies and some are using my picture. I was kicked out of the band in 1996 and they then hired Sean McCabe