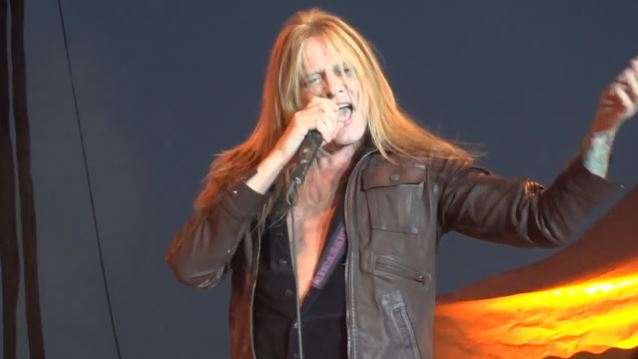 Metal Wani's Dawn Brown recently conducted an interview with former SKID ROW singer Sebastian Bach. You can now listen to the chat in the YouTube clip below.

Asked if he has commenced the songwriting process for the follow-up to his latest solo album, 2014's "Give 'Em Hell", Bach said: "Honestly, I have two songs that I would sing to right now. One was written by [GUNS N' ROSES and SIXX: A.M. guitarist] D.J. Ashba, and it's an incredible tune, and the other song is one by Devin [Bronson, guitarist for Bach's solo band]. But I am not thinking about making a record right now. I've put out 'Angel Down' [2007], 'Kicking & Screaming' [2011], 'Give 'Em Hell'… not to mention [the] 'ABachalypse Now' [CD/DVD package from 2013]. I've put out so much stuff that I feel like I've made a lot of solo records, and people have gotta catch up with me a little bit. I've made a lot of solo records, and my fans love 'em, but I don't think they realize how much time and effort and money and attention to detail and everything is on those records; my whole heart and soul is on there. And it takes so much of your essence and spirit. And to make that happen… Like, to make a record is… People don't get it. You don't just walk in there and make records. It's like this whole crazy process that takes years; 'Give 'Em Hell' took two years [to make]. So people say, 'Are you doing a new record?' I mean, I will… I definitely will some day — a hundred percent. It's just… I don't think people really get how much it takes to make a record that's good. They don't understand."

He continued: "To be honest, I've gotta recharge my batteries a little bit. I have given everything I have. I am so exhausted — not from [performing] tonight — [but] from thirty years of this. I'm gonna admit to you: I need to recharge my shit in order to make a record that is as good as that record. But I will do a record some day."

Bach went on to say: "I'm telling you, fans: go buy the [albums] I already did. Not that I'm complaining or anything, [but] I'm saying, it's gonna be a while before you get a new record from me. I'm not gonna rush it."

Sebastian also confirmed that he will likely aim for a stripped down production on his next solo effort, something that he attributes to his appreciation for the vintage sonics of the '70s and '80s.

"I listen to music from the '70s exclusively," he explained. "It's because of the sound of those records, like 'Rock And Roll Over' [by KISS] or, okay, [from the] '80s… VAN HALEN 'Women And Children First', [from] 1980… STEELY DAN, or Phoebe Snow… The way these records sound… I'm a singer, so when I get on a seven-hour plane flight, I'm not gonna listen to some death metal from 2011; I'm gonna wanna… I want something that's gonna hit me, mellow me out for a long plane flight… The sound of Phoebe Snow's voice is like being massaged, the way she sings… She hits so many in notes in one little word; it embarrasses people. And [rapper] Kanye West, [who] says, 'I'm the greatest rock star'… Phoebe Snow had more talent in her left fingernail than fucking Kanye West… Talking about Kanye West is getting me fired up. He's kind of an idiot. 'I'm the greatest rock star.' Just because you say that means you're not. Rock stars don't go around telling people they're rock stars. They get people telling them that."

Bach is continuing to tour in support of "Give 'Em Hell", which was released on April 22, 2014 via Frontiers Records.

As previously reported, Dey Street Books (formerly It Books), an imprint of HarperCollins Publishers, has set a January 19, 2016 release date for Bach's much-anticipated autobiography, "18 And Life On Skid Row".