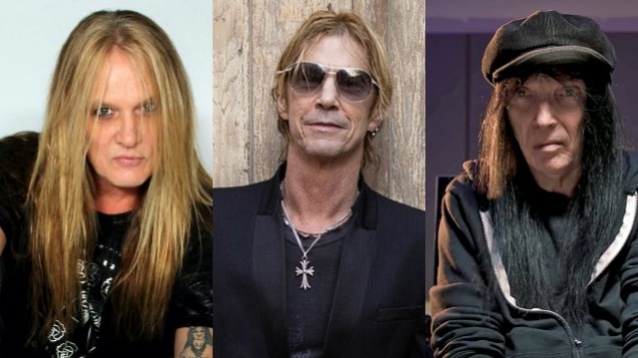 Said Bach: "It kicks complete and total ass in every way!! I CAN'T WAIT FOR YOU ALL TO CRANK THIS UP!!!!!"

Regarding how Barker came to be involved with the project, McDaniels told SPIN: "I went to a party. Travis is there. He walks up to me and says, 'Most people jumped on the [RUN-DMC] bandwagon with 'Walk This Way', but I was there since 'Rock Box'. When I heard 'Rock Box', I knew I could be a rock star.' And he said, 'If there's ever anything I could do for you.' I go, 'Oh, by the way, me and Sebastian are doing this thing.' He's, like, 'I'm in.' That showed me that what I did in '85 was resonating two generations below me. But we was always wholesome. We were dominant, we were godlike, but you didn't see a celebrity; you felt like you was down with us."

Although an early recording of "Black Betty" goes back to 1939, courtesy of bluesman Huddie Ledbetter, it was later tackled by MANFRED MANN in the early 1970s before becoming a hit in the hands of the New York City outfit RAM JAM in 1977.

This is not the first time Sebastian and Duff have recorded together. Back in 2014, McKagan played on Bach's "Give 'Em Hell" solo album. Duff and Sebastian also previously collaborated on McKagan's 1993 solo album "Believe In Me".

Nearly 20 years ago, McKagan confirmed that Bach was at one point being considered for the lead-singer position in VELVET REVOLVER prior to the arrival of Scott Weiland.

"[Sebastian] did some amazing, fantastic stuff on [the music we gave him to record vocals over during the VELVET REVOLVER singer-audition process] and, you know, he's an old friend of ours and I love the guy dearly," Duff said. "The problems we ran up against is, it's, kind of, with Baz, we sounded like SKID ROW, and we don't want to go down that [road]… We're forging forward, you know, [and] we want to try to break some new ground."