Sebastian Bach is selling a pair of his "pre-owned" boots. The "size-12-to-13" brown leather boots were worn on stage "hundreds of times for hundreds of concerts" by the former SKID ROW singer, and are said to be "literally proven to kick ass on stage the world over!!"

Says Bach: "It takes me a long time to find a pair of boots that were really made for rockin'. These are those boots. I have worn these on stage for years, all over the world, during hundreds of concerts.

"I bought these originally at Boot Star in Hollywood, California years ago and I have worn them out through countless shows on the stages of rock 'n' roll the world over. There are holes in the soles, but that did not stop me from doing shows in them. These fit like a glove or would look cool in your man cave in your rock 'n' roll memorabilia section. I will sign these if you would like. Rock on."

The boots are available on eBay with their current bid set at $1000. They come with an autographed signed document of provenance from Sebastian Bach.

These boots were made for ROCKIN'! Now they could be yours! This is the real deal! https://t.co/CyOg4BzfuV 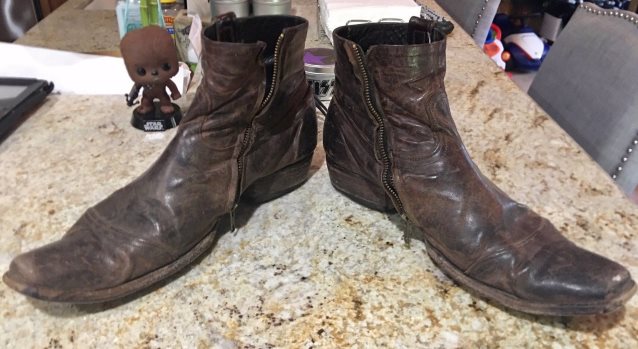