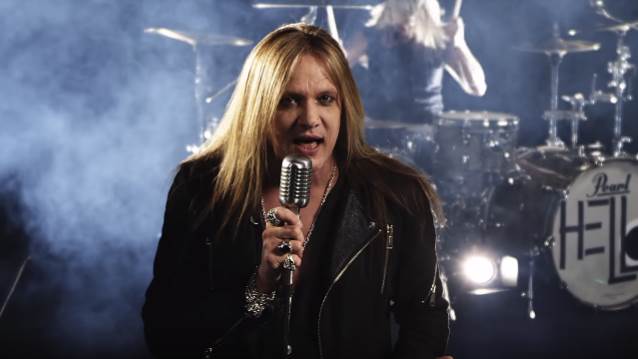 Sebastian Bach says that he is about to sign a deal with a U.S.-based heavy metal record label that will help him make a "career-defining" new solo album.

Bach hasn't released a full-length disc since 2014's "Give 'Em Hell", which was criticized by some for sounding "too modern" and a departure from his '80s hard rock past. Like its predecessor, 2011's "Kicking & Screaming", the disc was released through Frontiers Music Srl, the Italian label which specializes in what's commonly called AOR, a term that once signified a popular radio format ("album-oriented rock") but nowadays applies to acts whose airplay is marginal.

Speaking to Meltdown of Detroit's WRIF 101.1 FM radio station, Bach stated about his plans for his next solo album: "There's no timetable. I do have exciting business that is happening on the record front. I can't tell you what that is right now, but it looks like I'm gonna have the best shot that I've had… No, it doesn't just look like — for sure, I'm going to have the best shot at having a big solo record with the situation that is occurring that I can't tell you about. [Laughs]"

He continued: "The solo records I've put out were put out by a record label based out of Italy. So you can only do so much e-mailing back and forth. What's happening now is that a United States-based company is hooking me up. I'm not allowed to tell you, but I think I just did. Fuck! [Laughs] I always get in trouble, dude. That's one thing about me — I'm always in trouble, always. That's why you all love me so much, 'cause you can relate to me, 'cause you're all in trouble too."

Although Bach has said in some of his recent interviews that his next record would be less musically aggressive and it would be "more uplifting and fun," he appears to have had a change of heart.

"Well, before [the new record deal] happened, I was thinking of doing more of an acoustic-based record because I've done a lot of solo records," he explained. "I've done 'Angel Down', which I'm very proud of that album, and I'm really hoping to get it out on vinyl sometime soon. Then 'Kicking & Screaming', which is a great album. 'Give 'Em Hell'… Not to mention 'ABachalypse Now', which is a three-record set. 'Forever Wild' DVD, 'Bring 'Em Bach Alive!'… I've put out a lot of records. And putting out the last one, when I put so much time and effort into it and it doesn't get the attention that it deserves, for me as an artist, I'm, like, 'Fuck!' So I was, like, you know what? If I'm gonna put out another heavy metal, hard rock album, I need help. I need a company around me that's gonna put the same kind of attention and time and effort into it as I am. So now that looks like it's happening. So now I'm changing the way I'm looking at things."

He continued: "If I have a team around me, then I would love to do a career-defining record; for all you guys who love SKID ROW records and my solo records, I would love to do that. So that's what I'm aiming to do. And I've got John 5 [ROB ZOMBIE, MARILYN MANSON]; he's got two songs on there now. And Steve Stevens from BILLY IDOL, who's also one of my favorite guitar players ever. Nuno Bettencourt [EXTREME] is sending me some stuff. So I'm just heading down that road. But I'm looking to put out a heavy album now; I'm getting back into the metal. [Laughs]"

Bach went on to say that he doesn't overthink the record-making process and prefers to let things happen organically. "All I try to do is make an album," he said. "I don't know I get to the point of having it done. But I try to surround myself with the best musicians. I've got Bobby Jarzombek, who's one of the best drummers in the world, and he's been in my band since I stole him from [Rob] Halford's band. So he's with me still to this day.

"I've had the band [I have] for a long time," he continued. "[Bassist] Rob De Luca, I've been playing with him for over 10 years. So it's not just like a new thing. We have a great chemistry; we play well together. Brent Woods on guitar is amazing. Bobby is the best you can get. So I'm pretty happy with my band — I really, really am."

Bach recently had a drum recording studio built on his property in Southern California for the purpose of demoing music for his next studio album.