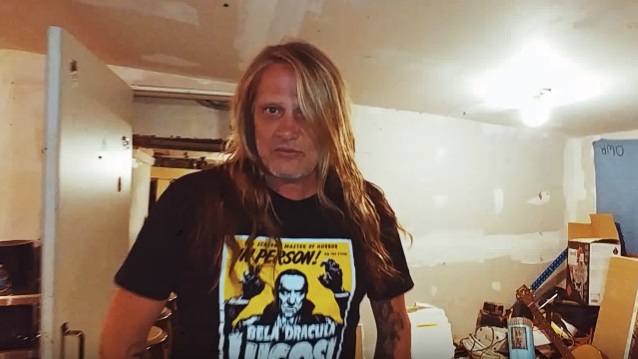 Sebastian Bach has begun "cutting demos" for one of the tunes for his next studio album. According to the former SKID ROW singer, the song was written by former MARILYN MANSON and current ROB ZOMBIE guitarist John 5, "and it rips."

A video update from Bach can be seen below.

Sebastian previously stated that "the mission" of his next record "is to capture a cool vibe, and I think that really involves live drummers playing — not just a drum machine, which seems to be too pervasive today in music."

According to Bach, he is still "in the writing and demoing stage" for the follow-up to 2014's "Give 'Em Hell". "I'm in the process of changing record labels," he said. "My manager, Rick Sales, wants me to have a good demo that he can take to people to play for them. Right now we have seven songs. Two of them are by John 5, and I also have Steve Stevens [BILLY IDOL] sending me some tunes, and Billy Morrison [BILLY IDOL]. And Brent Woods [VINCE NEIL]. And we will see which riffs make the cut."

Sebastian also talked about the inspiration for his forthcoming album. He explained: "My tastes have changed a bit since my doctor told me that if I wanna keep my hearing in great shape, I have to turn the music down sometimes. He told me this a couple of years back. And since he told me that, I've taken his advice and I don't crank my music as loud as it will go anymore, and that's all I can tell you. So I've gotta make a record that I like. So I don't think it's gonna be a death metal record; I think it's gonna be more uplifting and fun. And also real people playing real music — that's very important to me."

Bach was particularly thrilled to be once again working with John 5, whom he described as "just incredible. Everybody knows him and he is one of the greatest guitar players in rock and roll.

"Some people always want me to reunite with the old band, but think of it this way — I get to make records with John 5. So that's pretty amazing," he added.

Bach hasn't released a full-length disc since "Give 'Em Hell", which was criticized by some for sounding "too modern" and a departure from his '80s hard rock past.

Sebastian told Australia's Hysteria magazine last fall that he wanted to make what he called his "'California record,' which is probably gonna be more concerned about the vocals than the guitar, the drums and the bass. The last records I loved that I've done, but they're kind of similar. So now it's time for me to do a different-sounding kind of record," he said. "So that's what I'm doing. I'm into acoustic guitar right now a lot. And that's not to say if somebody plays me some wicked crazy riff that I won't do it, but I'm trying to make a record that's gonna put me into the next phase of music. That's what I'm working on now."

Bach went on to defend his decision to make a softer-sounding album this time around. He said: "The thing is that my records, mostly, have had a lot of aggression in them, and I'm not feeling aggressive right now. So I'm not gonna pretend to channel some anger that's not real. But, you know, there's things that I am angry at, like the climate being destroyed — I'm angry at that. And the first song that I just recorded has lyrics kind of to do with that. But people like my ballad voice; that's, really, at the end of the day, what people like to hear me sing like. And I like that too, and that's the way I'm feeling right now, so that's the [way the] music [is] coming out — it's got a lot of harmonies, and the vocals sound great, and that's what I'm gonna give you in your ears… It's gonna be focused on the vocals, harmonies, but it's gonna sound like me, 'cause that's all I can sound like."