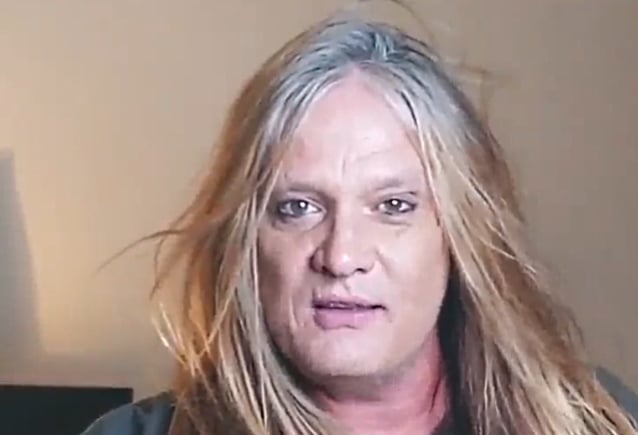 Sebastian Bach has finished demoing 14 new tracks for his next studio album.

On Friday (February 5), the former SKID ROW singer took to his social media to share several photos of a CD-R containing his latest demos, and he included the following message: "14 Brand New Songs to make [an album] from! Thanks @john5guitarist @orianthi @TheRealDevinB @Stevestevens @bjarzombek @brentwoodsmusic @AlienSatan @sanesi @kevinchown & all who helped me out! If u like Skid Slave sUBHUMAN AngelDown Kicking GiveEmHell u will dig this2".

Last month, Sebastian told The Aquarian Weekly that he was working on a new album but he declined to name the record company that will be putting it out. "Yes, I have a new American label and I have been working somewhat on the album during this damned quarantine," he said. "But there is only so much I can do in my house. I have been sending files back and forth [to my bandmates], but it is not as exciting as being together in the same room. Maybe Taylor Swift lives with her whole band. I don’t know how that works."

He added: "My new album is going to be heavy. In many ways it is my follow-up to [2007's] 'Angel Down'. I am trying to make the best record I have ever made. There will be a lot of heavy [music] coming your way."

Back in 2018, Bach told Meltdown of Detroit's WRIF 101.1 FM radio station that he was going to ink a deal with a U.S.-based heavy metal record label that would help him make a "career-defining" new solo album.

Although Bach had said in some of his interviews a few years ago that his next record would be less musically aggressive and it would be "more uplifting and fun," he told WRIF that he has since had a change of heart.

"Well, before [the new record deal] happened, I was thinking of doing more of an acoustic-based record because I've done a lot of solo records," he said. "I've done 'Angel Down', which I'm very proud of that album,. Then 'Kicking & Screaming', which is a great album. 'Give 'Em Hell'… Not to mention 'ABachalypse Now', which is a three-record set. 'Forever Wild' DVD, 'Bring 'Em Bach Alive!'… I've put out a lot of records. And putting out the last one, when I put so much time and effort into it and it doesn't get the attention that it deserves, for me as an artist, I'm, like, 'Fuck!' So I was, like, you know what? If I'm gonna put out another heavy metal, hard rock album, I need help. I need a company around me that's gonna put the same kind of attention and time and effort into it as I am. So now that looks like it's happening. So now I'm changing the way I'm looking at things."