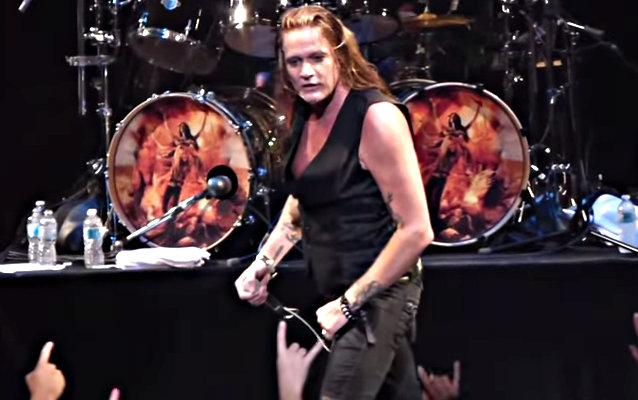 Bach's new solo album, "Give 'Em Hell", sold around 4,000 copies in the United States in its first week of release to debut at position No. 72 on The Billboard 200 chart. Released on April 22 via Frontiers Records, the follow-up to 2011's "Kicking & Screaming" was once again produced by Bob Marlette, who has previously worked with ROB ZOMBIE, BLACK SABBATH and SHINEDOWN, among others.

In a recent interview with Steppin' Out, Bach stated about "Give 'Em Hell": "I absolutely love the record. I worked so hard on it. I tortured myself.

"The process is pretty funny. I'm in the worst mood for a year when we're making it and then I hear what I want to hear at the end and I'm the happiest, most humorous guy in the world.

"I think it sounds timeless.

"There's certain singers that can still sound the same as they get older, like Steven Tyler [AEROSMITH], and I'm very lucky that I can do that as well, but I don't know how I pulled it off! It's also my best-sounding record. I'm a total audiophile as far as wanting a clear, clean sound and no separation between the instruments."