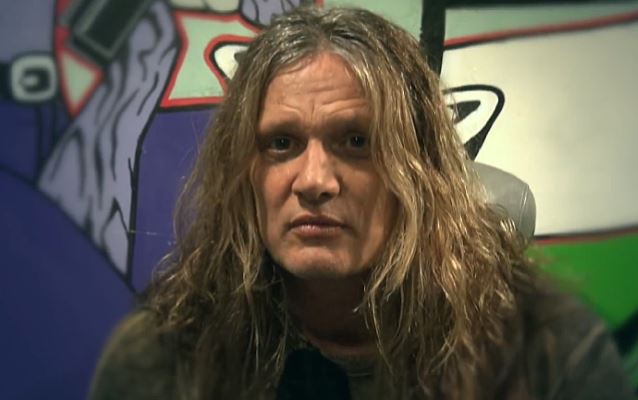 In a brand new interview with Loudwire, ex-SKID ROW frontman Sebastian Bach was asked if he had any conversations with his former bandmates prior to the group recently replacing singer Johnny Solinger with Tony Harnell.

He continued: "There's two things I don't get. How can you be mad at somebody for something they did 19 years ago? I mean, really, let's get serious: It's not like I saw him last week and threw him down a flight of stairs or anything. I haven't seen that guy in 19 years. I don't even know what to say. It's insanity.

"I go to Amoeba Records and I buy a 180-gram vinyl RUSH 'Fly By Night' and it is the greatest feeling. I am so excited that they put out these albums and I can go there and get a new copy with all the packaging and the stickers and the downloads. The RUSH 'Sector One' box set with the first album — I took it out and put the poster on the wall of our garage. It's so fun.

"SKID ROW fans do not get that opportunity. I would like to say it's out of my control.

"It makes me heartbroken that the first SKID ROW album came out 25 years ago and there is not a 180-gram vinyl addition with a poster and a… It makes me nuts. It makes me crazy, if you want to know the truth.

"I don't even have to be in the same room with those guys to do that shit. Why don't we embrace the legacy like every other band? All I mean by that is put out a DVD, put out a vinyl record, put out a box set."

Bach added: "I would like to apologize to my fans and SKID ROW fans. I'm sorry that you can't go enjoy what we made for you. It doesn't exist. There's not one DVD of our videos. You cannot go and buy a DVD of the '18 And Life' video — it doesn't exist. Why? I mean, why?

"We got offered a reunion show at [the] Sonisphere [festival in England], and I can tell you all the details because it never happened. We were offered $250,000 per show for two shows, a Friday and a Saturday night. We were going to get paid half a million dollars and Rachel didn't want to do it. If you're in a company with somebody and they are turning down your work, that's really a bummer.

In a July 2014 interview with Planet Loud, SKID ROW guitarist Dave "Snake" Sabo was asked if there were any plans for the band to celebrate the 25th anniversary of the release of its debut album, which came out in 1989. "You know, I haven't even thought about it," Dave said. "We're constantly asked about a reunion [of the classic SKID ROW lineup] and have been since the twentieth anniversary and the offers have been phenomenal, but, for me, I don't know. At this point, I don't have an interest in it. Again, it's not like I have any hatred for it or anything like that. I'm where I'm at right now and it feels really good."