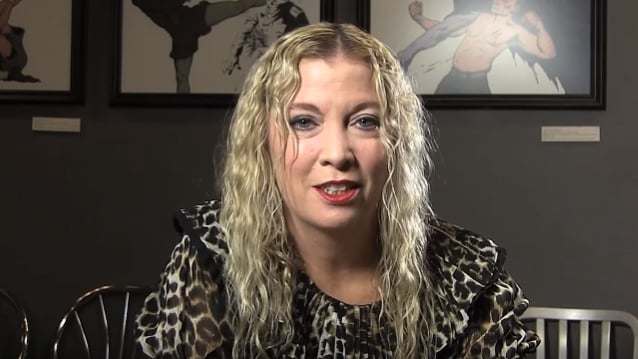 Sean Yseult, best known as the bass player from the multi-platinum and twice Grammy-nominated band WHITE ZOMBIE, was asked by "Rock Talk With Mitch Lafon" if she misses "being part of the team," more than two decades after the group's split. "Well, the team completely broke up and split four different ways in '96, so there's not a part of being… part of the team anymore," she replied (hear audio below). "I'm still great friends with Jay [Yuenger, guitar], I'm still great friends with Johnny Tempesta [drums], and even past members — Tom Five [guitar], Ivan De Prume [drums]; I'm in touch with all these guys."

She continued: "Rob [Zombie, vocals] is Rob. He's just decided he doesn't wanna talk to any of us once he went solo. And I don't know his reasons why exactly, but having been in a relationship with him for seven years and [having] had a band with him for 11 years — something like that — I do know that was kind of his pattern, so it wasn't a huge surprise. And no, I'm not upset [that WHITE ZOMBIE ended] — I was definitely ready for that to be over with and get back to the reason I moved to New York City, which was to create designer photography. So I'm fine with it. And I love being friends with Jay and Johnny. I get postcards from all over the world from Jay, like, every other day, so it's pretty fun."

Zombie said in 2016 that he had "many legit reasons" for not wanting to reform WHITE ZOMBIE, despite some fans' suggestion to the contrary. But he refused to divulge any details, explaining, "everything is not everybody's business."

Rob told The Pulse Of Radio that nowadays a lot of his audience isn't even familiar with the old WHITE ZOMBIE songs. "The crowds are really, really young and I've been noticing that with the set list too, because, you know, as the time has gone on, we've really worked the WHITE ZOMBIE material more out of the set, because we've been finding that it's not working like it used to," he said. "It seems like that those songs just seem now old to people and it's very strange."

Yseult's new photography series, "They All Axed For You", is being displayed at the Boyd Satellite Gallery in New Orleans, Louisiana. The photographs serve as both a love letter and birthday gift for the city of New Orleans on the anniversary of its Tricentennial.