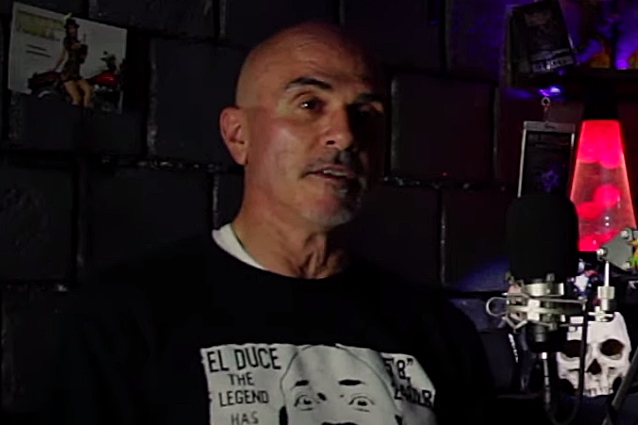 It has been 26 years since San Francisco Bay Area thrashers VIO-LENCE released a full-length album, but in the wake of their recent reunion, the members of the band have started talking about the possibility of hitting the studio. The group has been playing comeback shows throughout 2019, with singer Sean Killian returning to the stage after a successful liver transplant surgery in March 2018.

In a recent interview with EXODUS vocalist Steve "Zetro" Souza on his "Toxic Vault" video channel (see four-part chat below), Killian shared his thoughts on VIO-LENCE possibly recording the long-awaited follow-up to 1993's "Nothing To Gain".

"Right now, we're just going through the motions of playing the shows and enjoying riding this wave," he said. "Phil [Demmel, guitar] and I have talked a couple of times. It's kind of up to him because he is very busy doing a soundtrack for a video game and I guess a Netflix series, and he's doing [METAL] ALLEGIANCE and these other things he's doing. It keeps him out there and he needs to be out there doing what he's doing because he's a musician. That's what he does. I'd love to write some new stuff. He and I have kind of talked a little bit about it. The rest of the guys are, like, 'I want to write. We need to write an album!' But it's Phil and I that need to connect."

VIO-LENCE performed its first comeback concert in April at the Oakland Metro in Oakland, California and spent the last few months playing select shows in the U.S. and Europe.

Although MACHINE HEAD frontman Robb Flynn was part of VIO-LENCE's classic incarnation and played on the band's debut album, "Eternal Nightmare", he wasn't approached about doing the comeback shows.

In a recent interview with Australia's Heavy, Demmel stated about the prospect of new music from VIO-LENCE: "We're just kind of enjoying getting through the shows and playing with each other. We're going to be getting to a part where we're traveling together, so we're still kind of feeling each other out in that sense. New music? Sean's itching to write some new music. I'm not itching as hard. I've got a lot on my plate. VIO-LENCE is definitely a priority, but that's just a step I haven't... It's hard, because you have this comeback, and then you play the songs, and you want to be good. I don't want to put out something that isn't as good as 'Eternal Nightmare' or some of the songs from 'Oppressing [The Masses]'. I want to have something that's quality. I want to be with these guys long enough to know that that can happen, because I don't want to put out something shitty. I don't want to taint the feeling that people would have, because I know the live show's there, but I don't know that the creative part, that aspect of it, is there yet. Until I'm sure of that, I just kind of want to enjoy what we're doing now. [We're] just really trying to be kind of delicate with it. All the fun we're having, I don't want to fuck it up."