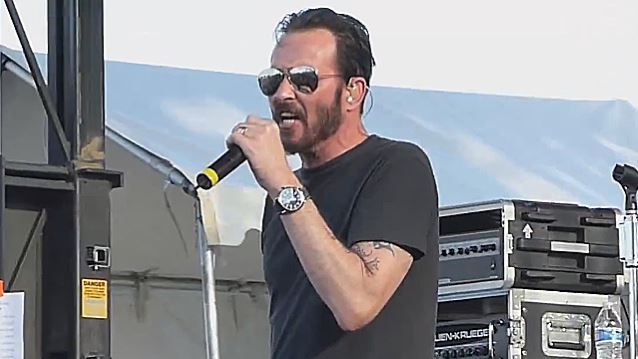 Scott Weiland's widow is selling the engagement ring she received from her late husband.

Photographer Jamie Wachtel Weiland writes on her Facebook page: "This is the ring Scott gave me when he proposed. Eight months into this new chapter of my life, I need to part with it. I am so sad to see it go but it's a truly gorgeous piece and I would love for it to make someone as happy as it once made me."

The bid is currently at $8,000 on eBay. The item description reads: "18kt white gold is set with 2 – 25 point marquis diamonds, then mimicking the same marquis shape are 12 – 2 point round diamonds. Set on top of a seamless eternity band, that sits beautifully on the finger. Total weight 2.74 carats. Stunning & timeless for generations to come. All diamonds are conflict free. Size 5. Can be re-sized up or down in size (labor and materials will apply). Made with love in the USA."

Jamie Wachtel Weiland earlier in the year filed a claim against Scott's estate, saying the late STONE TEMPLE PILOTS and VELVET REVOLVER singer owed her $64,406. According to TMZ, Jamie said she and Scott signed a prenuptial agreement before their 2013 wedding which provided that the musician would put $2,000 into a separate account each month that they were married, with a provision that the amount would increase by seven percent annually. But Jamie said Scott had only made two deposits by the time he died in December 2015.

The agreement that Jamie and Scott signed was said to clearly state that what was Scott's before their marriage remained his, and vice versa, while it also waived Jamie's right to spousal support.

Scott's previous wife and the mother of his two children, Mary Forsberg, filed court documents on December 30, 2015 asking to be named the executor of Weiland's will. She also filed a copy of the will, written in April 2007, with his signature as proof. His estate is reportedly worth $2 million, including a trust with undisclosed assets.

This is the ring Scott gave me when he proposed. Eight months into this new chapter of my life, I need to part with it....