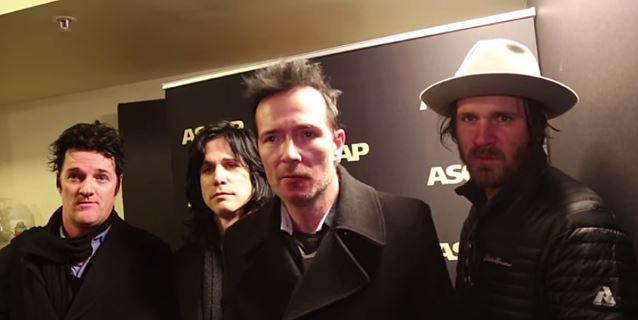 According to The Pulse Of Radio, Scott Weiland and his band THE WILDABOUTS still intend to tour the U.S. next month despite the death last week of guitarist Jeremy Brown. The band did postpone a show scheduled for this week in London until September 3, saying in a statement, "Unfortunately, due to our guitar player Jeremy Brown's passing, this week's show in London will be postponed until September 3rd. We will be coming back to play a full U.K. and European tour at that time. Your current tickets will be good for the show on September 3rd at the Garage, and thank you to all of our fans for understanding while we grieve and take next steps to be back for the U.S. tour in May."

Brown passed away at the age of 34 from unknown causes on March 30, one day before the March 31st release of THE WILDABOUTS' new album "Blaster".

In a statement issued on the day of the album's release, Weiland said, "I’d like to dedicate today's release of our album, 'Blaster', to my friend and collaborator Jeremy Brown. It breaks my heart that you are not here to receive the recognition you so deserve and worked so hard for."

There is no word yet on who Weiland will seek as a replacement for Brown in the group.

Weiland and THE WILDABOUTS' first scheduled U.S. date is April 25 in Jacksonville, Florida at the Welcome To Rockville festival.