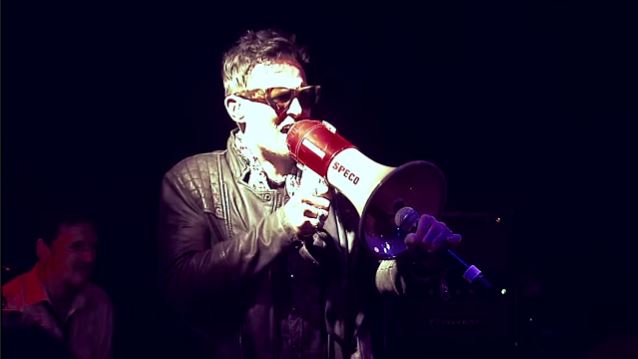 The singer's tour with THE WILDABOUTS features him playing STP classics and select VELVET REVOLVER cuts alongside two songs from THE WILDABOUTS' forthcoming album, tentatively due in November. So far, seven songs have been recorded, with five more to come. It will be Scott's third solo studio LP and first since 2008's "Happy In Galoshes". Weiland has stated in recent interviews that the new album will be more of a full-band effort.

"It's like an indie rock 'n' roll record that has a garage element to it," Weiland told the Toronto Sun."The band — we're all friends and we have the same ideals and the same ideas musically, artistically, sonically, how we want things to sound, to be treated ... Kind of creating sort of a T.REX-meets-SABBATH (vibe) with a little bit of Appalachian feel in between."

He added in a separate interview with the Nanaimo News Bulletin: "It's definitely a lot more indie sounding than the big riffs that are STP or VELVET REVOLVER. It's rock 'n' roll, but it has a modern artistic approach to it. A lot of that is taking a lot of time thinking about what kind of tones to use, what kind of pedals to use. We're really kinda of leaning towards multi-fuzz boxes and adding octaves to that, like low octaves as far as the riffs go."

THE WILDABOUTS originally began as a five-piece but recently decided to drop down to a four-piece, a format that "works out a lot better" because it adds "so much more space between the notes and that space is really important," Weiland said.