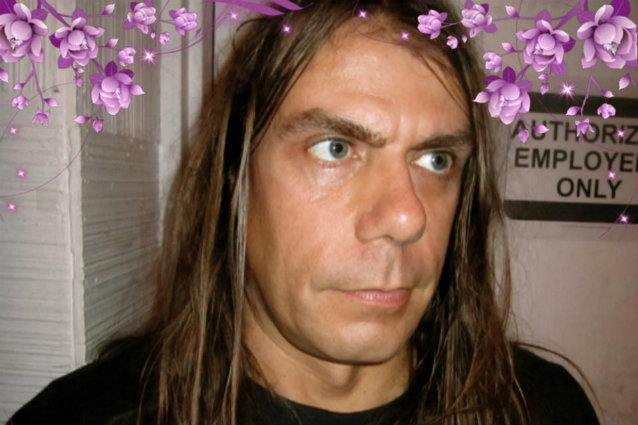 Joel Gausten: There's obviously a very strong DISCHARGE vibe on this record, and I'd imagine they're a huge influence on you guys. What was your first introduction to DISCHARGE, and how has that band influenced you over the years?

Scott: "I heard [DISCHARGE's 1982 album] 'Hear Nothing See Nothing Say Nothing' not long after it was released. I think I was standing in line at a VENOM gig or something, and I had on a GBH t-shirt. The guy next to me was, like, 'Do you like DISCHARGE?' I was like, 'Never heard of them.' He was, like, 'If you like GBH, they're even more intense.' With the way he described it, I was like, 'Oh, I've gotta have that!' I ran out and bought it immediately. It blew my fucking head off at the time; it was just so nihilistic and heavy, and the imagery was so strong. It immediately struck a chord with me that never faded.

Joel Gausten: I interviewed Lee last year, so I know he always has a full plate. With that said, where do you see SEPTIC TANK going in terms of possible touring or more music beyond this point?

Scott: "Maybe not tour, but we're definitely going to play. We're in talks right now to go to Japan, and I'm sure some other stuff will come up. It's just a matter of time. Once the album gets out there and people are aware that it's a band, we're sure more gigs will pop up. But I don't really see us going on a full-blown tour — probably just some minor stuff here and there. There will be more music for sure. The record was so much fun to make and came together so easily that I'm sure we'll do another one."

Joel Gausten: I want to discuss something that came up when I talked to Lee. There was a short-lived time in the '90s when a lot of extreme metal bands — like GODFLESH, NAPALM DEATH and, of course, CATHEDRAL — ended up going through the major-label filter. Because you came up musically before that happened, what are your thoughts on that particular major-label era when you look back at that now? Did you see that having any impact — either positively or negatively — on the genre and its history?

Scott: "I don't think it was negative in any way. I actually came aboard CATHEDRAL right at that time. The 'Soul Sacrifice' EP [1992] had been released on Columbia, and 'The Ethereal Mirror' [1993] wasn't out yet. They were just starting to do press for it, and I met with them in New York, went back to England with them and started jamming. I was there from the beginning of the whole major-label thing, and I'm glad it happened. It was an interesting and educational experience to be on a major label at that time in the early '90s and see how big the operation was. It was amazing. Photo shoots cost $10,000, and there were $50,000 videos. Just a lunch to talk about the photo shoot had like 15, 20 people at a super-expensive restaurant! The stereotypical excessive behavior of these labels was ridiculous. The amount of money they wasted on just shit that was going nowhere… There were a handful of people who knew what they were doing and understood the music and knew exactly what it was. In fact, the people who signed all of the Earache [Records] bands to Columbia were actually very smart people who were totally in touch with the scene and everything. These guys knew what they were doing, but the people above them had no idea what was going on. The executives were just throwing money around and ordering photo shoots and stuff that was just absolutely ridiculous. That was fun; I enjoyed it. There were certainly some ridiculous ideas. I think they wanted [singer] LG [Petrov] from ENTOMBED to start going to the gym and get pumped up like [PANTERA's] Phil Anselmo. They just didn't understand what they had, but the bands made the records that they wanted to make. There was no meddling in the creativity part of it. That part of it was fine; it didn't affect the music much, and it probably did give that music some wider exposure. NAPALM DEATH had videos on MTV — at least on 'Headbangers Ball'. That part of it was cool, and most of those bands are still around. CATHEDRAL lasted for another 17 years after that. NAPALM are still around, CARCASS are still around, GODFLESH are still around and ENTOMBED are still around in one form or another. All those people are still out there."