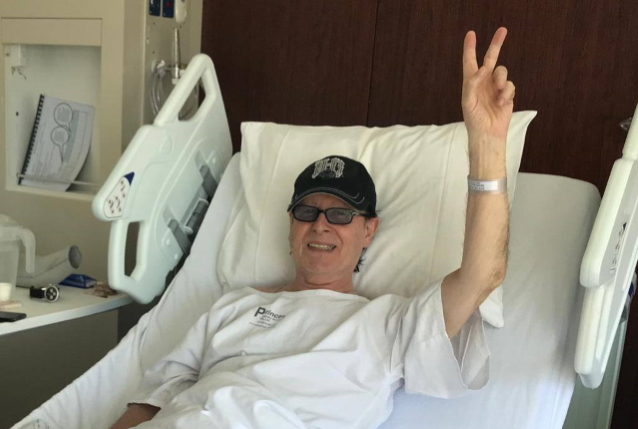 SCORPIONS singer Klaus Meine has spoken out for the first time after undergoing surgery to remove kidney stones. As a result of the procedure, the band's concert with WHITESNAKE in Sydney on Saturday (February 22) had to be postponed.

Earlier today, the SCORPIONS social media was updated with a photo of Meine in his hospital bed, along with the following message from the 71-year-old vocalist: "Dear Fans , the good news first .... we had a fantastic show in Melbourne wednesday night at the Rod Laver Arena .... loved every minute of it .... it just feels soooo good to be back in Australia !!!! The bad news is... I have had kidney stone surgery in a Melbourne Hospital ... it was a very painful attack ,....

"In the hospital they removed the stone, and put in a stent .... can you imagine how i feel right now ??? So sorry Sydney .... Do we have to cancel again ??? It looks like it.... but we are hoping to re-schedule for next week,day to be announced.

"Dr Katz and his team are taking very good care of me ... i’m in the best hands, but i doubt i’ll be back on my feet until early next week..... with lots of Love with a Heavy Heart from Melbourne .... Klaus"

SCORPIONS and WHITESNAKE's concert in Brisbane this Monday (February 24) is expected to go ahead as planned.

This is not the first time SCORPIONS have called off a show in Sydney. Back in November 2018, the German band had to cancel its appearance in the city while supporting DEF LEPPARD on an Australian tour.

Dear Fans , the good news first .... we had a fantastic show in Melbourne wednesday night at the Rod Laver Arena .......

Posted by Scorpions on Saturday, February 22, 2020