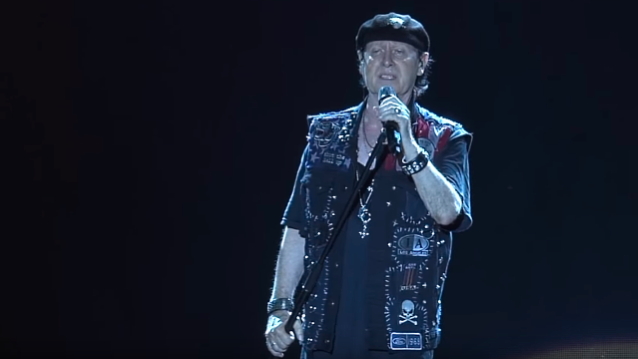 The show at Qudos Bank Arena in Sydney, Australia with WHITESNAKE, which was originally meant to take place on Saturday, February 22, was postponed to four days later to allow Meine enough time to recover from his operation.

This was not the first time SCORPIONS had called off a show in Sydney. Back in November 2018, the German band had to cancel its appearance in the city while supporting DEF LEPPARD on an Australian tour.

During last night's concert, Klaus told the audience that he was thrilled to be able to play music again.

"It feels so good to be back in Sydney tonight," he said (see video below). "Oh, yes. What can I say? It feels really good to be on this stage here tonight. First, I wanna say, sorry for 2018. And sorry for last [week's postponement]. What a mess. Kidney stones, they really knocked me out in Melbourne, and I feel so good to be back on my feet tonight."

Unfortunately, due to insurmountable logistical issues, the SCORPIONS and WHITESNAKE show scheduled to take place at the Spark Arena in Auckland, New Zealand on Thursday, February 27 has been canceled.

After his surgery, Meine described his latest health scare on social media as "a very painful attack" and apologized for postponing the Sydney concert.