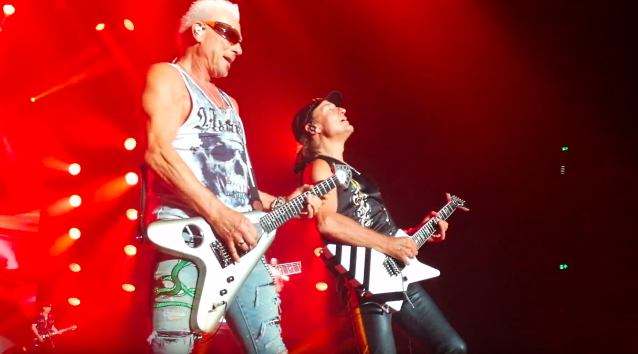 Professionally filmed video footage of SCORPIONS' entire October 4 performance at the Rock In Rio festival in Rio De Janeiro, Brazil can be seen below.

This past June, SCORPIONS guitarist Rudolf Schenker confirmed to Scorpions News that the band has commenced the songwriting process for a possible new studio album. If it materializes, the upcoming disc will mark the German hard rock legends' first release since 2017's "Born To Touch Your Feelings - Best Of Rock Ballads", which was an anthology of SCORPIONS' new and classic material.

SCORPIONS singer Klaus Meine told Scorpions Brazil that "there were plenty of ideas" when the band returned to the studio in April. "It was a really good vibe to work without big pressure or anything — just come back together, write a couple of songs, enjoy some time in the studio," he said. "And it really turned out really good and in a very positive way. Because we hadn't been in the studio for quite a while, so it was a very positive experience. And I would have loved if we could keep going, because we just have a great flow."

Meine went on to say that there was a "good feeling in the SCORPIONS camp" that "there might be a new album out in 2020… It's just a very positive experience, and it feels like such a great start with songwriting; we recorded some demos and stuff," he said. "So it really feels good; we're in a good way to come up with something next year."

Last year, Schenker told Headbangers Lifestyle that SCORPIONS have tapped "a famous and well-known" producer to helm the band's new LP. He added: "We are all very excited to produce a new, historic rock 'n' roll album."