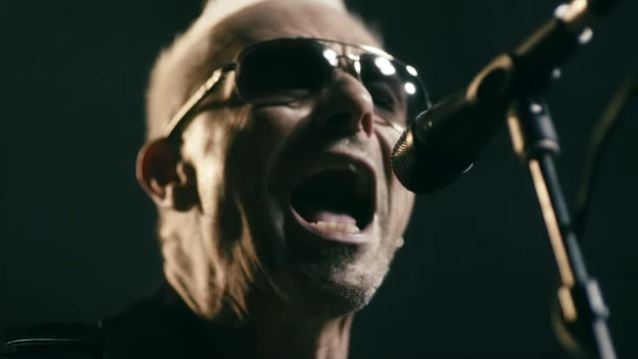 Robert Cavuoto of Guitar International recently conducted an interview with SCORPIONS guitarist Rudolf Schenker. A couple of excerpts from the chat follow below.

Guitar International: You'll be releasing the SCORPIONS 50th-anniversary deluxe editions, eight of your most influential albums, on November 6. Tell about the process of doing this.

Rudolf Schenker: Much of the world outside of the U.S. and Canada were not able to buy many of our albums from "Taken By Force" to "Savage Amusement". We told our manager, we had to find a way to get these albums out to the rest of the world. We found a partner with BMG and they had a vision for this — putting out the albums like they originally looked with great packaging. These songs, albums, and photos are like diamonds to us, very precious and we needed to have them sound the best they could. We had Dieter Dierks give all our material to BMG and the person handling this project was a SCORPIONS fan, and he put this all together in beautiful packaging. So beautiful that we nearly cried when we saw it. Now we have a fantastic way of releasing these old albums, the crown jewels of our 50-year career, available to everyone. Eighty percent of our fans on Facebook are between 16-28 years old — that's worldwide. Not so much in America, because of the radio format, but the rest of the world it's like that. On the last tour we started to see more young fans mixed with our older fans. That's the reason we needed to get our back catalogue right. We also made the film, "Forever And A Day", for all the young fans to see what we are all about.

Guitar International: When the SCORPIONS started, did you think you would be still going strong 50 years later?

Rudolf Schenker: I was really into rock 'n' roll with Little Richard and Elvis Presley, but that wasn't the reason I started playing guitar. That came later when I saw THE ROLLING STONES and THE BEATLES. I saw in my naive young brain, five friends going around the world making music. That was my philosophy in the beginning. I had that vision and then built a friendship around it. This was the key to making history together. It took so long for us to come out of Germany, from 1965 to 1972, to make the first album, "Lonesome Crow". I was the manager, bus driver, guitarist, singer, roadie — everything — until my brother, Klaus Meine, came along. It was the platform for us to start; it was also the right way to start. We didn't get the fame and success too early in our career. We went through it the hard way with heart; that's why we are still at it 50 years later. We didn't take the easy way. Kids nowadays can't handle the rock-star lifestyle, when it's achieved too quickly. Fifty years later, we are putting out a new CD, "Return To Forever", a documentary, "Forever And A Day", the deluxe editions of our back catalogue and we are out touring! We have these four things going on and we are so busy with everything. On one hand, it's very good, and on the other hand, sometimes it's too much. In the end, the fans will get the best of us and that's very important. We always look to take care of the fans.

Guitar International: After 50 years of touring how do you keep it new and fresh?

Rudolf Schenker: In the past, going on the road was routine: you go here, you do this, you play that. By announcing the farewell tour and coming out with an album called "Sting In The Tail", produced by these fantastic two Swedish guys Mikael Nord Andersson and Martin Hanson, it became clear that we had a new feeling for creating music. Like I mentioned, the kids in the YouTube generation were looking for whatever they can find on us and when they have something they connected with they then want to see us live. We realized we have a new generation of fans. Suddenly it grows, and we have three generations of fans coming to see the show. We have kids around the world, including Asia and Russia, telling us, "You can't stop now. I want to see you!" There is a new generation in front of the stage. It's refreshing for us. It's like when Keith Richards put fresh blood in his veins, and this new perspective was like new blood in my veins. When we did this "MTV Unplugged" in Greece, MTV asked us and, of course, we wanted to do it. In the '80s, we couldn't do it because we had no time. In 2013, we found the time and it was a big success. We went out of the routine and into a new exciting time. You have to make your time and life on earth exciting. We appreciate what the fans give us and we try to give more.