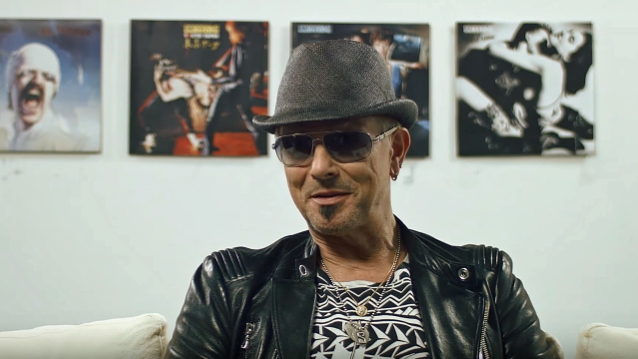 Prior to SCORPIONS' September 14 concert at the Amalie Arena in Tampa, Florida, guitarist Rudolf Schenker spoke with JAM Magazine. The full conversation can be heard below. A few excerpts follow (as transcribed by BLABBERMOUTH.NET).

Rudolf: "I played a lot of guitars before I was running into the Flying V. [I] actually started with Framus, a German company, [before] going into Vox guitars. From Vox, I got [my] first Gibson guitar from my father. It's a Trini Lopez [ES-]175, I think, but this one was, especially when we start playing with the big Marshall amplifiers, very difficult to play because of the feedback floor. Then I got, believe it or not, a Fender, which I didn't like — it's not my way — but then I saw one picture of Johnny Winter with the Flying V. I said to my brother [Michael], 'This is my guitar. You think me, for a rhythm guitar player, it's not too much?' He said, 'No.' I [got] this guitar and started playing it with a fifty-watt Marshall [amplifier]. The sound was fantastic, so from this moment on, I played a Flying V. But there was one thing in between — my brother. He actually had a girlfriend and he took his Les Paul to his girlfriend's house. Somehow he forgot the guitar in the house of the girlfriend, and the girlfriend went with her parents over the weekend somewhere. We had a big festival to do, and... my brother came to me and said, 'Hey, I have no guitar. What can we do?' In the end... [I said,] 'Try my Flying V with the fifty-watt Marshall.' He tried it and he said, 'Yes, that's working.' After the concert, he came to me and said, 'Rudolf, I can't give you back the Flying V. The sound is so good.' That's the point when my brother went to UFO... I said to myself, 'I want to have back the Flying V,' because I tried Firebirds, I tried Explorers, all this stuff, and none made the sound... like the Flying V. I play [a] Flying V since then permanently."

On the guitar solo of which he's the most proud:

Rudolf: "One which I think is a perfect one is 'Wind Of Change'. It's a very important song because it became the soundtrack of the most peaceful revolution on earth, and I was very much working on it, not [improvising] and by accident came something out. I tried to make it like an anthem, and that worked out."

On how the band selects a producer:

Rudolf: "It's the same like with a band. When I started SCORPIONS, for me it was one thing [that was] important — the right chemistry. I was looking for good musicians, but also for people I can build a friendship with. This chemistry is the most important point. You can feel the vibe. Is it working or not? This vibe, it's a very important point. It's not a name. Sometimes we said, 'Okay, we like this production he did with this band. Let's see how he's working with us or how he's reflecting our spirit.' If everybody has the same opinion, then go for it."

On whether the group would consider adding a keyboardist:

Rudolf: "In '73, when we did 'Fly To The Rainbow', we had a keyboard player, Achim Kirschning. But I tell you one thing — we noticed that the keyboard player does not make sense for SCORPIONS. [From that point,] we never, ever thought about it."

SCORPIONS recently performed a handful of American shows with QUEENSRŸCHE, the group's first U.S. shows since the band canceled the final five dates of its fall 2017 tour due to vocalist Klaus Meine's "severe laryngitis."