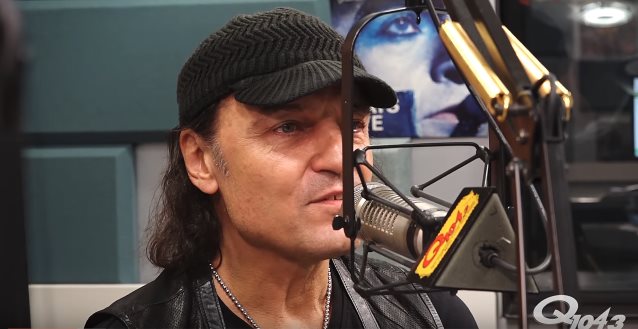 Guitarist Matthias Jabs of SCORPIONS has expressed concern over the current state of the world's affairs, noting that their classic 1990 post-communist bloc ballad "Wind Of Change" is "a song of hope" and insisting that his band will "never give up hope."

Jabs and new SCORPIONS drummer Mikkey Dee (formerly of MOTÖRHEAD) were interviewed by Jim Kerr and Shelli Sonstein of New York's Q1043 radio station prior to the band's September 16 show at Madison Square Garden in New York, New York. Dee was asked if there was a learning curve in joining a band with a fifty-year history like SCORPIONS. "It's not easy to step into a band that's been running so long," Mikkey said. "They have their ways and I also have been playing thirty-five years internationally myself. But, no matter, especially, they have their ways, but, it clicked right away. You can kind of feel that. It takes thirty seconds and a small tour."

Dee officially joined SCORPIONS in September 2016 as the replacement for James Kottak, who was dismissed from the band during his well-publicized battle with alcoholism. Jabs was asked if SCORPIONS kept Dee in mind after the December 2015 passing of MOTÖRHEAD leader Lemmy Kilmister. "Actually, I did," Matthias said. "Due to the sad circumstances that Lemmy died. We didn't have to think very far. I mentioned it to our manager and said, 'Can you give Mikkey Dee a call?' I didn't want to call myself. He would have been too shy on the phone to answer. I said 'Let's see what he's up to.' Luckily, he had the time to come over. We rehearsed while the tour was going on in the afternoon secretly, then at some point, we had to make the decision to change drummers."

Conversation then shifted to the band's ongoing popularity in Eastern European countries like Poland, where SCORPIONS retain a sizeable fanbase. The band's 1990 ballad "Wind Of Change" strikes a particularly strong chord in these regions for its message of unity and hope. Released on the band's "Crazy World" album, "Wind Of Change" celebrated the end of communism. Jabs was asked how he felt about how the United States and Russia once again being at odds. "Obviously, things keep changing in the world," he responded. "At the moment, we have a feeling not exactly for the better, not the way we consider better. Better was when everything seemed be united and peaceful. It's a song of hope and we never give up hope, but currently, there are more conflicts than ever. [Communism] was easy to understand. It was black and white. Now, it's fifty shades of gray."

As previously reported, SCORPIONS had to cancel the remainder of their North American tour dates with MEGADETH due to "severe laryngitis." According to a statement released by the German hard rock veterans, SCORPIONS singer Klaus Meine has been advised by top throat specialist in Los Angeles to rest his voice. If he continues the tour, he could risk permanent vocal damage. The band said: "[We] truly hate to disappoint our fans and hope to come back to America soon, but this time we have no choice but to cancel."