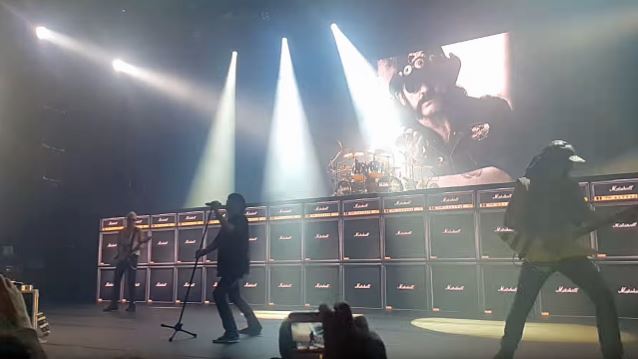 SCORPIONS' current touring lineup includes MOTÖRHEAD drummer Mikkey Dee. Dee is filling in for James Kottak, who is currently on break while he seeks medical attention.

"It's been great," Mikkey said about playing with the SCORPIONS. "These are great guys and we've known them for many years, and I love their music."

Regarding how playing with SCORPIONS is different from performing with MOTÖRHEAD, Mikkey said: "I played so long with MOTÖRHEAD, we were a three-piece, and that's a tremendous difference. For instance, when Phil [Campbell, MOTÖRHEAD guitarist] was doing his solo, I might have to be a little busier on the kick drum. Here [in the SCORPIONS], I've gotta think the opposite — I've gotta be easier on certain things and step into some other stuff. But it's a great challenge. I mean, these guys are so nice, and we've known each other for many, many years. And it's a great honor to carry the SCORPIONS flag here."

For some of SCORPIONS' 2014 concerts, Swedish drummer Johan Franzon filled in for Kottak.

Dee was originally scheduled to play drums for THIN LIZZY on the latter band's anniversary shows planned for 2016 and 2017 but was forced to bow out of the dates after he was offered the SCORPIONS gig. He has since been replaced in that group's touring lineup by JUDAS PRIEST's Scott Travis.