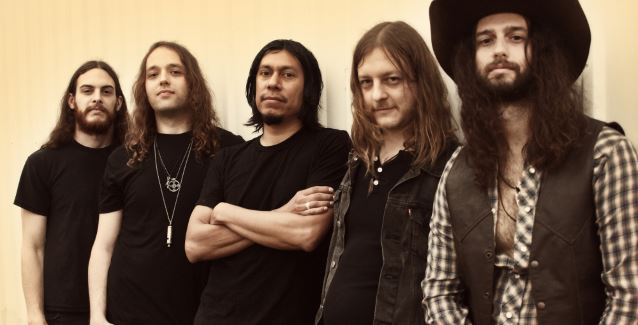 Austin heavy psych-rockers SCORPION CHILD have released a brand new single, "She Sings, I Kill". This new track gives us a furtive glimpse into the Texans' highly anticipated upcoming sophomore album. Aryn Jonathan Black returns with his rich, electrifying vocals interweaved with the groove-laden riffs of guitarist Christopher Jay Cowart and the sauntering bass work of Alec Caballero Padron. More impassioned than ever, SCORPION CHILD has something to prove.

"She Sings, I Kill" is now available as a seven-inch vinyl and digital download. The single contains the new track as well as another new song, "(Enter The) Twilight Coven", which will be a B-side exclusive to this release.

Aryn Jonathan Black commented: "Rather than viewing 'She Sings, I Kill' as a first single off of our upcoming album, it serves more as a window into its creation. It offers a mix unique to this release but also previews one direction taken on this next record that we're excited to finally bring into fruition. We hope you enjoy."

The seven-inch single is available in black vinyl format as well as via digital download.

SCORPION CHILD's second album is due to be unleashed in early in 2016, and anticipation has been building. The band have once again been working with Chris "Frenchie" Smith (THE ANSWER, AND YOU WILL KNOW US BY THE TAIL OF DEAD... ) who produced and arranged the band's self-titled first full-length.

SCORPION CHILD originally formed in 2006 and has spent its interim years intensively perfecting and honing its songwriting skills and live performance. Moving to Austin to form the band with a single vision, they found the Texan city a great place to cultivate their expertise. Their sound heralds back to early '70s classic and psych-rock with an entirely original, and contemporary flourish.