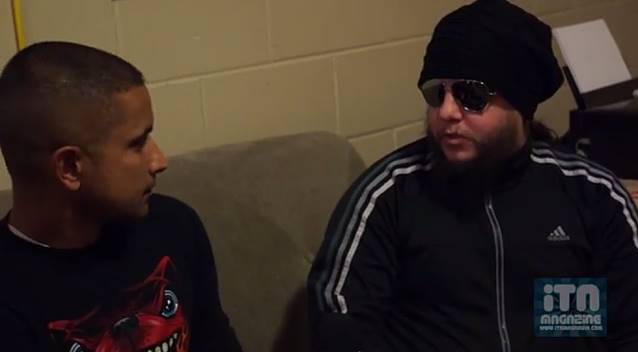 Shabby Hasan of In The Now Magazine conducted an interview with SCAR THE MARTYR drummer Joey Jordison (also of SLIPKNOT) and singer Henry Derek Bonner on November 15 at the Chesapeake Energy Arena in Oklahoma City, Oklahoma. You can now watch the chat below.

SCAR THE MARTYR's self-titled debut album sold around 3,300 copies in the United States in its first week of release to land at position No. 129 on The Billboard 200 chart. The CD was made available on October 1 via Roadrunner Records.

"I'd been working on new SLIPKNOT material since the end of the 'All Hope Is Gone' tour cycle, but I ended up with so much stuff I had to take a step back and stop working on it," he explained to Metal Hammer magazine. "The time wasn't right. But I came up with a bunch of material that was really killer and heavy and started taking some of it in a different direction. I started focusing on a lot of the post-punk and industrial stuff that I've always loved and started putting super heavy and brutal guitars over the top of it. That's how it started. It's taken me a couple of years to get to this point, but I can honestly say this is the most satisfied I've ever been in the studio."