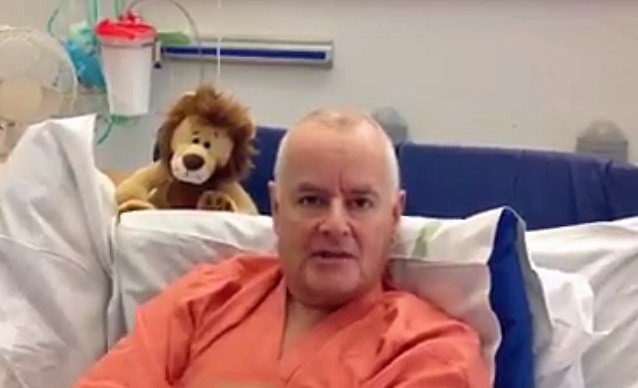 SAXON drummer Nigel Glockler has released a video message prior to going home from hospital, where he underwent emergency brain surgery last month. Check it out below.

Says Nigel: "Now it's 2015. [I'm] looking forward to getting behind the control panel of Starship Glockler again, but I'm gonna take it at exactly the pace that doctors have told me to do. I just wanna get home and start building my strength up and everything and start practicing on a practice pad at home with the sticks and everything and get ready for the next album and the tour that will follow that."

Glockler was diagnosed with an aneurysm (a bulging, weak area in the wall of an artery that supplies blood to the brain) after collapsing during the band's UK tour. He underwent a second operation after the first failed to fully address the problem.

As previously reported, SAXON has recruited Sven Dirkschneider, the son of legendary ACCEPT frontman Udo Dirkschneider, to sit behind the kit for their upcoming UK tour, which is scheduled to kick off in early February.

Nigel "will not be 100% fit" by the start of SAXON's UK tour. However, he "will be at the shows to meet and great the VIP ticket holders," according to a posting on the SAXON Facebook page.

SAXON was forced to postpone the remaining dates on its UK tour due to Glockler's health issues. The UK shows were due to be the culmination of SAXON's 38-date European "Warriors Of The Road" tour celebrating the band's 35th anniversary. The setlist featured tracks from what is known to the fans as "The Holy Trinity" — SAXON's seminal albums "Wheels Of Steel", "Strong Arm Of The Law" and "Denim And Leather".

The following shows are rescheduled as follows (tickets are valid for the new dates):

As previously reported, SAXON and veteran Los Angeles metallers ARMORED SAINT will team up for a few select shows in U.S. next spring.

Confirmed shows are May 8 in New York City at B.B. King Blues Club & Grill, May 9 in Worcester, Massachusetts at the Palladium and May 30 in West Hollywood at House Of Blues, with additional dates being considered.

SAXON will also appear at the Rock On The Range festival in Columbus, Ohio the weekend of May 15-17.