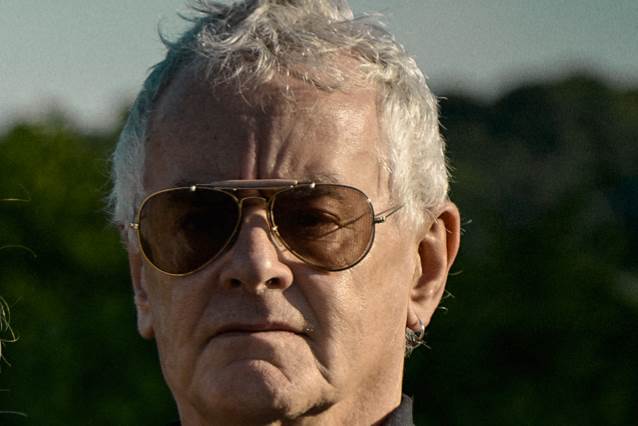 Jave of Kilpop conducted an interview with SAXON drummer Nigel Glockler at last month's Las Rageous festival in Las Vegas, Nevada. You can now watch the chat below.

Asked how the music business has changed in the four decades since SAXON was formed, Nigel said: "In some ways, it's better; in other ways, it's worse. I think from the industry point of view, for bands signing to record companies, I think it's worse now. Maybe not so much in the metal scene, but in general. Back then, in the '70s and stuff, a record company would sign you, say, for maybe four albums. And they'd be there and they'd nurture you, they'd come down to the studio while you were writing, they'd come in the studio while you were recording, they'd suggest producers for you — they would nurture you, basically. Now, particularly in the pop world, you see some of these people who used to be on reality-TV shows. They get signed up, they release an album, it bombs. Bye! Next! It's a tax loss. So that's the difference there."

He continued: "I think social media has been great, but there's more and more people on social media, so you can find out about these bands. I mean, the great thing I find is… for instance, with Amazon, if I go into Amazon to listen to something, 'cause I'm interested in a band, they go, 'If you like that, you might like this.' And I'd found so much stuff. It's great. And I found a lot of bands that I'd never even heard of."

SAXON's latest album, "Thunderbolt" was released on February 2 via Militia Guard (Silver Lining Music). The follow-up to 2015's "Battering Ram" was once again helmed by producer Andy Sneap, who has previously worked with JUDAS PRIEST, MEGADETH, ACCEPT and TESTAMENT, among others. The disc features original artwork by longtime SAXON collaborator Paul Raymond Gregory.

SAXON supported JUDAS PRIEST on the North American leg of the "Firepower" tour, which kicked off on March 13 in Wilkes Barre, Pennsylvania and wrapped on May 1 in San Antonio, Texas.