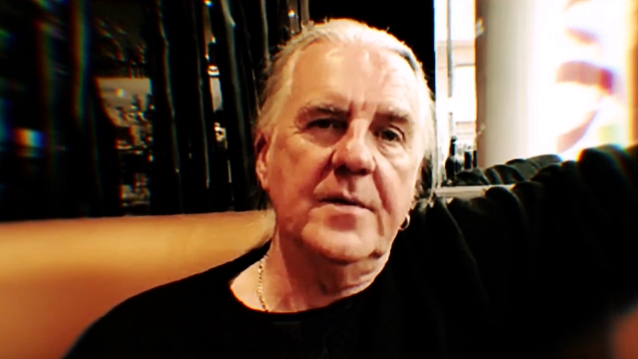 "Bods Mayhem Hour" recently conducted an interview with vocalist Biff Byford of British metal legends SAXON. You can listen to the entire chat below. A few excerpts follow (transcribed by BLABBERMOUTH.NET).

On what SAXON's expectations were upon the release of the band's 1979 self-titled debut album:

Biff: "[When] the first album came out, we were all pretty excited. It was our first album. There's nothing quite like the feeling of your first album. We expected great things. It sold okay. We're fairly big around where we used to play in the north of England and the Midlands. We sold all right, but obviously didn't sell enough to make the [laughs] charts, and the record company was a little bit disappointed. They told us to go away and write another album, which we did, which was 'Wheels Of Steel', our second album. We sort of went very big indeed. We came up with a good one when we had to, if you know what I mean. It was a bit touch-and-go at the time."

On what impresses him the most about SAXON's forthcoming "The Eagle Has Landed (Live)" box set that celebrates the band's 40th anniversary:

Biff: "I listened to hundreds of recordings, me and the engineer, [and] we just kind of picked great performances on the night. The recordings are taken from 2007 up to the JUDAS PRIEST tour of America. There's a lot of classic stuff on there and it goes from the '90s into the millennium albums. [We ended up] picking the songs we thought people liked live. There's quite a lot of album titles in there. But I didn't want just to release the old classics. I wanted it to be a cross-section of all the years we've been writing songs. There's quite a lot of classics on there, but they're a little bit different sometimes when there's a guest playing on them. There's a couple of them from Wacken with violin girls playing for us. It's a little bit different with the classic stuff. It was a good thing to do. It took me a long time. Sometimes I wanted a song but the performance wasn't up to where I thought it should be, or a microphone went, or the bass player was too busy headbanging and the guitar went off. If I wanted a specific song, I had to find it from all the different recordings. It was quite time-consuming and difficult, but we managed it."

On what he hopes fans will get out of "The Eagle Has Landed (Live)":

Biff: "It's the legacy of SAXON, from '79 right to present-day. When people buy this box set, they're buying into a legacy. There's a booklet with it, 40 pages of pictures from the early days right through to now. So, it's a big package, this. Obviously, we're only doing it once. Funnily enough, it's selling the best in America at the moment. There you go."

On being an influence on thrash bands such as MEGADETH and METALLICA:

Biff: "We were releasing albums that were cutting edge. We were creating something new back then. We were like the link between the early '70s music and the newer, sort of aggressive punkish stuff. Our music went straight down the middle. We blasted through from England with a new style and a new movement. It went 'round the world. A lot of American kids really bought into it. They liked it."

On what he hopes people get from listening to SAXON:

Biff: "I think it's a great piece of British history. We came to America in the '80s. We toured a lot there, culminating maybe in one of the biggest headline tours we did, the 'Crusader' tour. We toured on the album before, 'Power And The Glory' with [IRON] MAIDEN. All the people remember that. I hope when they listen to the album, it takes them back to the early days, and they can listen to what we've been doing in the middle years. I think it's good. There's basically four hours of music, nearly, three and a half hours of music, so it takes a bit of wading through."

On taking advantage of seeing legends of music while they are still alive:

Biff: "That's right. You never know with health. You have to keep your health. You've got to keep healthy. If you get sick, there's not much you can do about it. You just have to hope it's nothing too serious. We're all out there still smashing it away. If I was going to suggest to go see, if you're into metal, go and see bands who aren't as young as they used to be, and just get a flavor of what we are, really, and what we've been over the years. That said, we created a movement back in 1980 that still is around today and is still sort of relevant. We're still making great metal albums."

"The Eagle Has Landed 40 (Live)" will be released on August 2 via Militia Guard/Silver Lining Music. 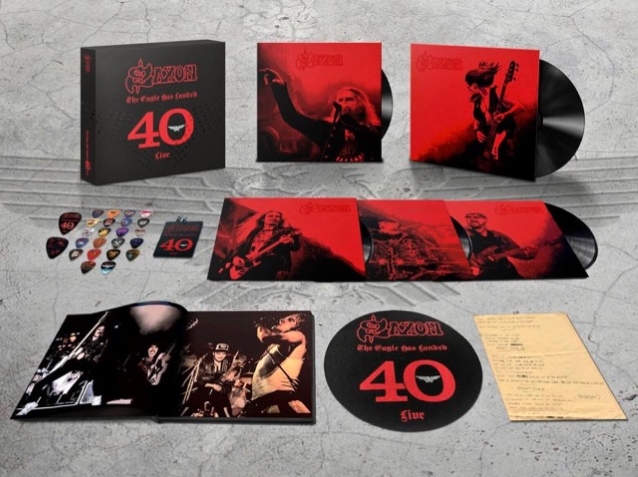