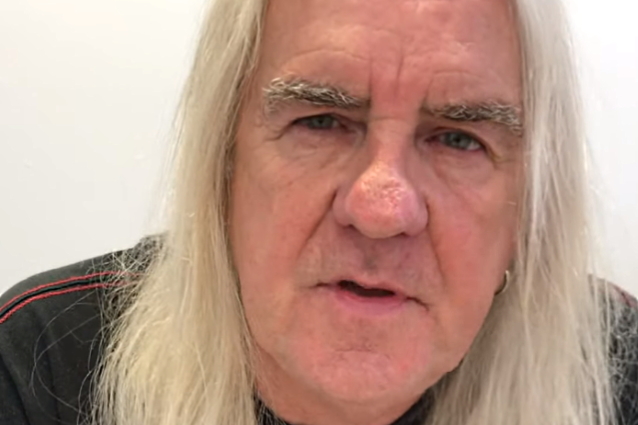 SAXON frontman Biff Byford will release his debut solo album, "School Of Hard Knocks", in early 2020. The album's first single, "Welcome To The Show", will arrive on October 25, while the follow-up single, the disc's title track, is expected to be issued on December 13.

"School Of Hard Knocks" will feature a guest appearance by OPETH guitarist Fredrik Åkesson, who collaborated with Byford on some of the material on the record.

"When we were done with the new OPETH album ['In Cauda Venenum'], I got a call from Biff," Fredrik told the "Scars And Guitars" podcast. "He wanted me to play guitar on his solo album, and we started writing songs together, so I wrote two tracks, which is more progressive metal type of tracks, and I did an arrangement of 'Scarborough Fair', which SIMON & GARFUNKEL is most famous [for]. He wanted more of a heavy version of that. [There have been] millions of versions of that track, but he's actually from that area, so it has some deeper meaning to him. I spent one month in northern England [and] did all the guitars for his solo album. I was very involved with that — almost co-producing a little bit, I would say."

Last year, Biff described the musical direction of his solo material as "probably" be "a bit more rock and roll, a bit more classic rock" than SAXON's recent output. He told Rock Bottom that the music will be "a bit similar" to SAXON, "but not the same. There'll be a few surprises on there," he said.

Byford told "Rock Talk With Mitch Lafon" that his solo record will probably feature a number of guest musicians. "I'm gonna ask various people [to appear on the record]," he said. "It's not easy for guitarists to work with you, because they just smack down their signature solo and off you go. Singers, I might do some duets and things. We'll see. I wanna get the songs written first, and then see who wants to work on them. I'll probably have a nucleus of a drummer and a bass player, although I might play bass myself. I've still got my Rickenbacker."

Asked why he just doesn't use the extra material for a future SAXON album instead of setting it aside for his solo disc, Biff said: "Well, I did. Actually, 'Roadie's Song' [off SAXON's 2018 album 'Thunderbolt'] was a solo album project. And I do move them across all the time. And actually, originally, 'They Played Rock And Roll' was a solo-album idea [that also ended up on 'Thunderbolt']. So I do that all the time. And I do have songs that me and Nibbs [Carter, bass] have written for SAXON that I didn't think were right for SAXON that might end up on my solo album."

Byford added that he doesn't compose music with a specific direction in mind. "The way I write is I write individual songs — I don't write albums, per se," he said.

Here is another update from Biff - check it out!