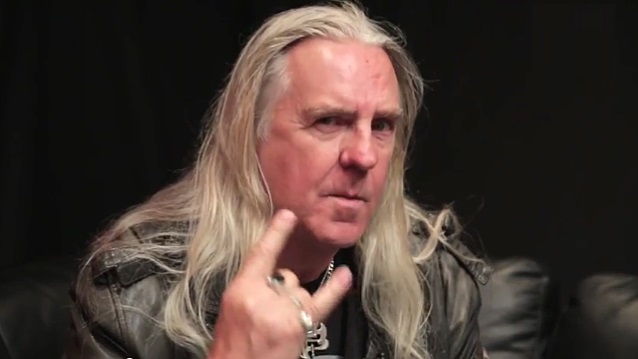 Metal Wani 's Owais "Vitek" Nabi recently conducted an interview with vocalist Biff Byford of British heavy metal legends SAXON. You can now listen to the chat in the YouTube clip below.

Biff also talked about the direction of the new SAXON material. He said: "Well, it's a mixture of rock and roll and heavy metal, as always. Some tracks are gonna be brutal and other tracks are gonna be about driving motorcycles and having sex and fun. So it's a mixture again. We can't seem to make our minds up what we are, really — we're either a classic rock band or a full-on metal band. So I think it's good. We're one of the unique bands in that position, really."

Asked about why bands like SAXON seemingly rarely produce their own records despite having made albums for more than three decades, Biff said: "We do produce them ourselves. I mean, I usually produce; the [other] boys [in the band] don't really produce albums. But, yeah, I produce our albums all the time. Sometimes I'll give the engineer producing credit, because he works a little bit harder than the norm. But I like to be in overall control of the sounds and the material that we're releasing now; that is of paramount importance to me, as far as the band is concerned. Because we can just sit back and just release anything and just rely on our hits, but I don't want to do that. So I'm totally in control of the material that we're using all the time."

Byford also spoke about the songwriting process in SAXON. He said: "I do write some songs on the albums, but usually I credit them as SAXON songs, so nobody actually knows with SAXON who writes what. But we'll see. I might change that on the next album. Let's see how it goes. But myself and Nibbs [SAXON bassist Timothy 'Nibbs' Carter] have written quite a few songs on this new album, just because that's how it worked out."

Asked about a possible release date for the new SAXON album, Biff said: "We're looking at maybe at a summer release. It just depends on whether it's ready or not. We're looking at finishing the album [by] the end of April. We're keeping our fingers crossed."

Three months after suffering a life-threatening ruptured brain aneurysm, SAXON drummer Nigel Glockler has "made a full recovery" and is "okay to get back to work."

Nigel was rushed to hospital in December and has underwent two surgeries. Filling in for him for SAXON's rescheduled U.K. tour was Sven Dirkschneider, the son of legendary ACCEPT frontman Udo Dirkschneider.

As previously reported, SAXON and veteran Los Angeles metallers ARMORED SAINT will team up for a few select shows in U.S. this spring.

SAXON will also appear at the Rock On The Range festival in Columbus, Ohio the weekend of May 15-17.