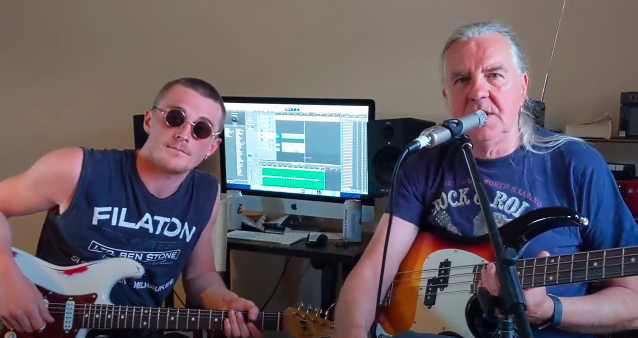 SAXON singer Biff Byford is collaborating with his son Seb (NAKED SIX) on a new album, to be released before the end of the year. Speaking to Sweden's RockSverige, Biff stated about the effort: "The record company wants to call it 'BIFF AND SEB' or 'SEB AND BIFF,' but we would like to do it with a band name and we've got the name HEAVY WATER. I quite like that name. We have a working title called 'Red Brick City'. We'll call it 'Heavy Water' or… I don't know. The working title might change. As we speak at this moment, we're doing bass guitars. I'm playing some and Seb's playing some. When I finish talking to you, I'm going back into the studio.

Asked if he is singing on the album, Biff said: "Me and Seb. He'll sing a song, I'll sing a song and we'll sing a song together. He plays guitar and I play bass and a friend of ours is playing drums, so it's a three-piece band at the moment. We might add some stuff, but I don't know. Again, we're recording it pretty quick and live, just like [SAXON's upcoming covers album] 'Inspirations', really. Very similar to my solo album, a very similar production."

Biff went on to say that his collaboration with his son is musically similar to that of Byford's first solo album, "School Of Hard Knocks", which came out in February 2020. "The songs are also, stylistically, very similar to the 'Inspirations' album," he explained. "There's some laid-back stuff and there's some heavy stuff. I wouldn't say there's any prog rock on there, but there are definitely two or three metal tracks on there. Seb's a great songwriter, and he likes to play heavy guitar riffs, so I'm sure people will be interested."

Asked what it's like working with his son, Biff said: "It's pretty cool. We're both pretty set in our ways, so it's working really well. It's great for me and for him, really. I'm getting off on his excitement and his first time doing things, and he gets off on my that wisdom that I've learned over the years."

"Inspirations" will be released on March 19 via Silver Lining Music. The 11-track effort contains some of the classic rock songs that influenced Biff and the rest of SAXON.

"Inspirations" was recorded at Brockfield Hall, near York in the U.K., which was built in 1804 and holds the largest collection of paintings by Yorkshire's impressionist artists — the Staithes Group.

"Inspirations" will be made available on vinyl, CD, digital formats and limited-edition D2C products.