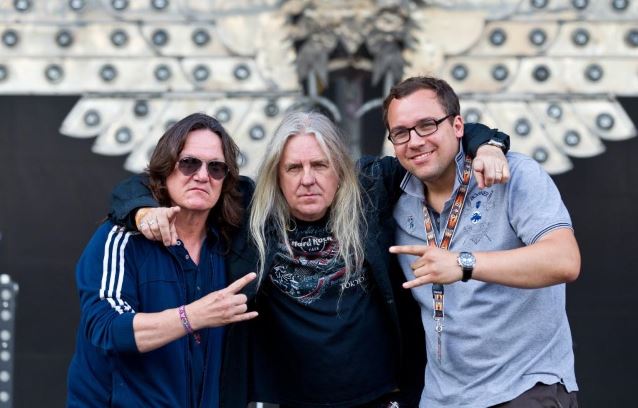 After over 16 years working together, British heavy metal legends SAXON and their manager Thomas Jensen have come to a wholly amicable, mutual agreement to part ways and explore new working avenues.

SAXON's venerable frontman Biff Byford said: "We have had a great and successful period with Thomas and will miss him very much. We will still be involved on other projects together in future, and we remain close friends and metal brothers."

Added Jensen: "I want to thank Biff and SAXON for over 16 years of metal and fun on the road. I feel very privileged to have worked for one of the greatest metal bands on the planet, and look forward to watching them continue asserting their metal power worldwide."

Jensen, Holger Hübner and Leo Loers will be expanding their management company MPS Hanseatic where they will also be offering business management, booking services and production coordination.

Byford recently told "The Great Metal Debate" podcast about the biggest change in the music industry since SAXON first started: "There have been quite a lot of changes. The digital thing was a messy change, when everybody wen digital. That was a crazy period, when we were experimenting with recording music on the Betamax video machine and stuff like this. We were all striving for a great sound, and the digital thing opened up a new level of quality. Obviously, the old-school vinyl stuff is back again. It's just different sounds, really. People these days, with the iPods and the streaming generation, I think people appreciate needles on vinyl and things like this. There's a big retro movement. But we've seen a lot of changes. I think maybe the digital thing… revolution was the biggest change in music… or, actually, in everything, really. You can make an album on a laptop now quite easily."