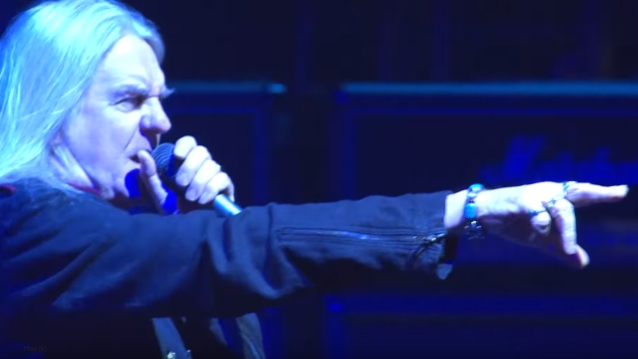 SAXON vocalist Biff Byford spoke to Heavy Music Headquarters about the fact that his band managed to release two full-length albums in 1980: "Wheels Of Steel" and "Strong Arm Of The Law". Asked why he thinks SAXON put out so much music in the early days and why groups no longer do this, Biff said: "I think it was we were prolific. We had a lot of ideas bouncing around. We were really into songwriting, so when we finished the 'Wheels Of Steel' tour, we started writing the 'Strong Arm Of The Law' album. We wrote it very quick and recorded it in three weeks. The band banged it out. That's how it went."

He continued: "I don't think we thought much about it at the time, but looking back, I think we could have slowed down a bit. We were moving faster than the audience. The audience had just gotten 'Wheels Of Steel'. They bought it and were processing it, picking their songs and we were touring a little bit on it. We came out and said, 'You got that one. Now get the new one.' We probably toured more on 'Wheels Of Steel', especially in America. It did really, really well in America. I think we cut the head of the monster a little bit, but it came together. I think we were moving faster than the industry. The industry wasn't ready for two albums a year."

According to Byford, what SAXON and LED ZEPPELIN did by releasing more than one album in a 12-month period was " a bit of a one-off. People don’t usually do it," he said. "It's a bit of a special thing. It's good to have something in common with ZEPPELIN, isn't it? There is no rock band on the planet that is not influenced by LED ZEPPELIN."

SAXON will celebrate its 40th anniversary in 2019 with what the band promises will be its "largest, loudest, brightest, most explosive show ever."