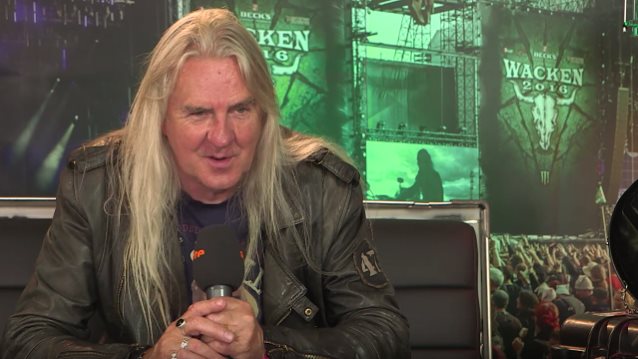 ARTE Concert conducted an interview with vocalist Biff Byford of British heavy metal legends SAXON at this year's Wacken Open Air festival, which is being held August 4-6 in Wacken, Germany. You can now watch the chat below.

Speaking about SAXON's first encounter with American groupies more than forty years ago, Biff said: "We were English, and obviously, there was lots of girls at shows in England, but they weren't quite as outrageously forward as the American girls were. We were really shocked [by] just [how] promiscuous [they were], just the whole out front, 'I wanna sleep with you,' and, 'Let's do it.' It was crazy — really crazy."

He continued: " It was great, actually. It's what all bands want to do. At the end of the day, that's what you get into it for, originally — the fame and the women and all the rest of it. It was good fun. But it was crazy, because they dressed really wild as well, with ripped clothes and really tiny mini skirts — you know, more rock and roll than the bands, really. And, of course, they were all really gorgeous as well. They were all between 18 and 21. I'm sure their parents didn't know what the hell they were doing."