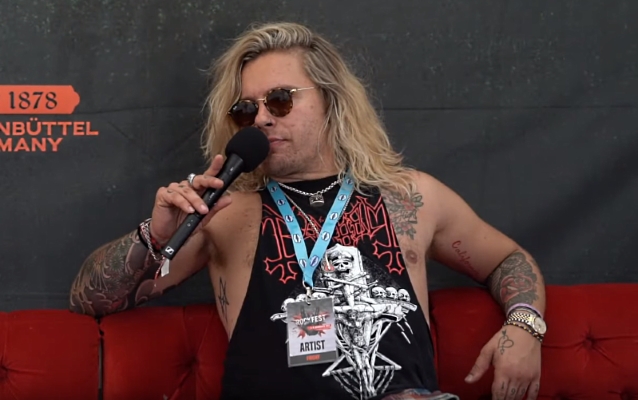 Following SANTA CRUZ's performance at the Finnish festival Rockfest on June 7, vocalist/guitarist Archie Cruz spoke with Kaaos TV. The full conversation can be viewed below. A few excerpts follow (as transcribed by BLABBERMOUTH.NET).

On the first two performances by the band's new lineup, which took place in Estonia alongside BON JOVI on June 2 and at Rockfest:

Archie: "It was amazing. Both of them could not have gone better. As you probably know, we had a little break for a year, not doing shows at all, so I couldn't have wished for a better comeback for the new lineup. That was perfect to me, man... We didn't know what to expect, to be honest. You never know, when you open up for a bigger band, if there's going to be anybody [there]. But it turns out, there were a bunch of people. It was, like, 50,000-capacity. It was packed. It was awesome."

Archie: "Personally, that's what drives me to do this. There's nothing wrong with doing headline shows and playing small venues and stuff like that, but to get those kind of opportunities every once in a while, it's like a cherry on top of the cake. It's kind of like if you have a day job and you get that vacation once a year — you to to Hawaii for two weeks. [That's] kind of what it is for a musician [when] you get that big slot to open for a favorite band. To have a tour like that, that would be amazing. That would be the next step."

On how he handled the breakup of the group's previous lineup:

Archie: "The whole year was very spiritual for me. I had to reevaluate myself, my goals, what I wanted to do. To be honest, this was something I wanted to do for quite a long time, but it was hard with the old members because everybody wanted to say something about everything, and the creativity wasn't really flourishing at the time. When the whole fallout happened, I saw this as a great opportunity for me to finally put myself out there creatively, the way I wanted to it for the longest time. It was a blessing in disguise, really."

On the group's forthcoming album, "Katharsis":

Archie: "I'd say the two songs we've dropped so far ['Changing Of Seasons' and 'Tell Me Why'], 'Changing' is probably the most modern — what some people call metalcore — and 'Tell Me Why' is more of a traditional end of the spectrum. It's a lot of BON JOVI there. I think it's going to surprise a lot of people in a bunch of ways, because there are still a lot of shockers to come for the haters, for the lovers of the band. There's going to be a lot of things to talk about for sure for the fans."

On whether he pays attention to fan feedback on social media:

Archie: "Not that much anymore, man. I've got to be honest. [Laughs] I feel like it's not good for my mental health to read that shit. Sometimes people post horrible stuff, and I'm like, 'I don't need that shit in my life.' I want to have positive vibes surround me, not hateful shit like that. I think it's just better to do my thing, because I'm going to do it anyway. No matter what they say, it's not going to affect the way I handle things or run my business or run my band. I just block the haters out of my mind and do it anyway."

SANTA CRUZ's fourth full-length album, "Katharsis", will be released this fall via M-Theory Audio. The record — the band's first since the group's previous lineup splintered in the midst of a spring 2018 U.S. tour with FOZZY — was tracked with producer Kane Churko (OZZY OSBOURNE, DISTURBED, FIVE FINGER DEATH PUNCH) at The Hideout Recording Studio in Las Vegas, Nevada.

In recent weeks, the group has previewed two songs from the new album – "Changing Of Seasons" and "Tell Me Why".