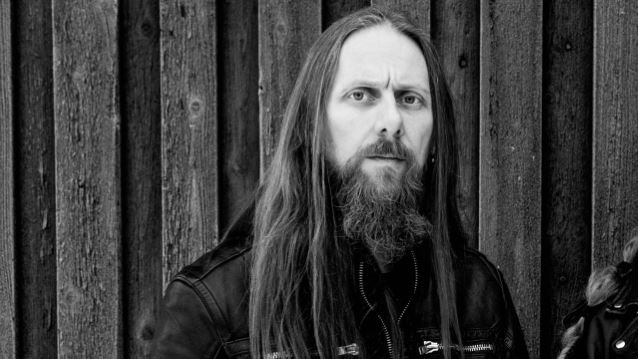 EMPEROR guitarist Samoth says that he agrees with Ihsahn's recent comment that making a new EMPEROR studio album "would be absolutely pointless," explaining that writing new music with his longtime bandmate would feel like "a forced compromise."

EMPEROR hasn't released any new material since 2001's "Prometheus - The Discipline Of Fire And Demise". That album was composed and mostly played by Ihsahn, with Samoth already forming his next band during its production.

The EMPEROR frontman recently told Metal Wani about the possibility of a new album from the band: "I think it's very obvious that, musically, [Samoth and I] are very far apart. So if people want a new EMPEROR record, what would they expect? They expect us to write music as if we were teenagers. So it's kind of a… you can't really win. At this point, I think it just would be absolutely pointless, because regardless of what route we would take and what would feel natural, if we were to do that, it would be… I think either way it would be a disappointment, because it's kind of just part of an illusion. And I see absolutely no point in doing that."

Asked by Friedhof Magazine if he agrees with Ihsahn's comments, Samoth — whose real name is Tomas Haugen — said: "I think maybe I have a little more nuanced view to it. Yes, the sound of Ihsahn and THE WRETCHED END and ZYKLON and PECCATUM previously are for sure different as I am more in the extreme metal genre while he is more on the progressive side, but we are still somehow in the same metal music landscape. I wouldn't say we are totally different in that sense, but definitely different approaches to how we execute our musical expressions within the metal genre.

"The thing is, the way Ihsahn makes music with his solo project is how he would make metal music, and for him to go back and compromise his progressive nature with a more back-to-basic black/extreme metal focus would feel like a step backwards for him as an artist, I think. I also agree that it would be very hard and 'forced' for us to sit down and try to make that compromise happen to try to make a new EMPEROR album. I'm not sure it would feel natural.

"If the musical expression is not really coming from a heartfelt desire, but rather from more of a forced compromise, I don't see anything good coming out of it."

He continued: "When we wrote '[In The] Nightside [Eclipse]' [1994] and 'Anthems [To The Welkin At Dusk]' [1997], these albums reflect very much that we were quite young, and that spesific era in our lives. I think that shines through in those recordings. One cannot just go back and redo that with the same youthful passion.

"Classic albums aren't just made, they happen and are basically impossible to redo. How many times don't you think METALLICA have heard, 'Write another 'Master Of Puppets'' or Kerry King [SLAYER] 'Write another 'Reign In Blood''?

"It's quite funny sometime when young people that maybe even weren't born when 'Nightside' was recorded and tell us, 'You should do another 'Nightside', man.'"

THE WRETCHED END's latest album, "In These Woods, From These Mountains", was released on April 22 via Indie Recordings.