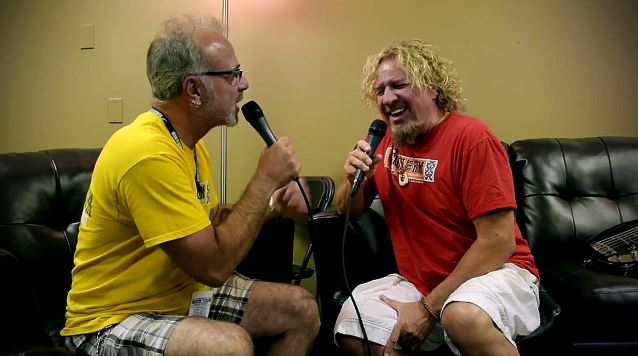 Guy Favazz of the St. Louis, Missouri radio station KSHE conducted an interview with legendary rocker Sammy Hagar before the former VAN HALEN frontman's July 19 "A Journey Through The History Of Rock" concert in the city. You can now watch the chat below.

He continued: "Mikey makes it so much better to sing the VAN HALEN stuff. It's awesome. I mean, our voices, when we're singing together on those harmonies, it sounds just like the record. And Mikey is the most fun guy in the world.

"Someone asked me, 'Who's your favorite guy to party with?' And I said, 'Michael Anthony.' I like to play music with him, I like to drink with him, I like to eat tacos and hot sauce with him, and I like to just hang out and drive cars with him. It's, like, no matter what I wanna do, or what he wants to do, both of us are willing to do it. It's, like, 'Hey, you feel like going to eat some tacos?' 'Yeah, let's go.' 'Hey, let's go drive some cars.' 'Yeah, let's go.' We have everything in common. And so he's my favorite guy to hang with. So being on the road with him is just a joy. And being on stage with him is just a joy. He's just upbeat, positive all the time. I love the guy."