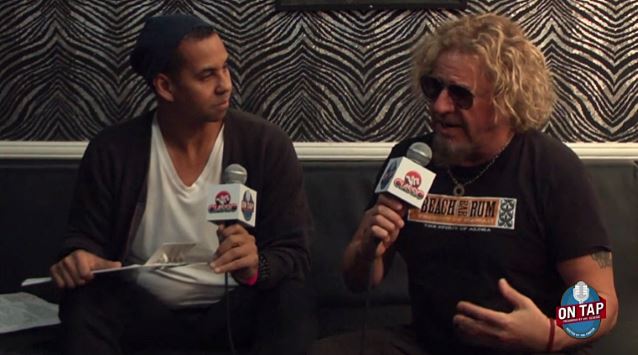 Asked to clarify the recent comments he made to Rolling Stone magazine where he was quoted as saying that he thinks CHICKENFOOT is finished making albums, Hagar said: "It's not that [CHICKENFOOT has] run its course, it's just that I'm not sure… in everyone's schedule that we can put aside a year and make a record, make some videos and go out and do a world tour, like what we would have to do. The recording side of it is what's tough; that takes so much time and finances. And if the record business for a band like that, if we could sell a million records, we'd probably say, 'Okay, at least we can pay for the record.' But when you spend half a million dollars on a record and it sells a a hundred and twenty-five thousand copies, I'm sorry, that's 'pay to play."

He continued: "In my life, everything I do now, I'm looking at [it like], this could be my last year of this. I don't know how much longer I can really do that hard grind. I love to go out on tour, but I can't do a hundred shows a year. I would probably have to retire if I did, if I tried to do that. So I'm trying to pick and choose everything I do and make it more special for me. What I wanna do. [What] makes me happy. And it ain't just about work. I'm not interested in making more money. It's about just making myself happy. And CHICKENFOOT would really make me happy, except for the damn workload and the success of it. It's just that the record business is kind of done. I mean, I'm sorry to say that. It's sad."