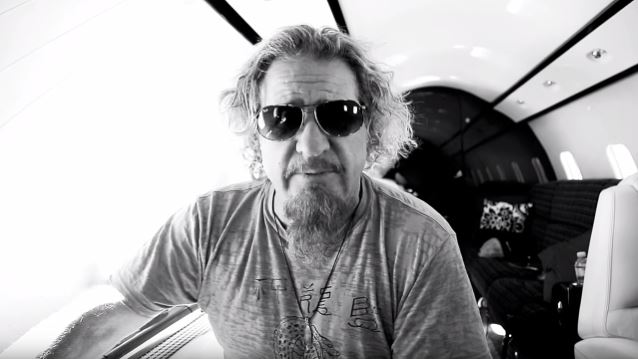 In a brand new interview with RollingStone.com, former VAN HALEN singer Sammy Hagar was asked if he thinks people are losing interesting in seeing the current lineup of the band, featuring David Lee Roth on vocals and Wolfgang Van Halen on bass. He responded: "I can only speculate on what I've seen on YouTube, things people send me now and then. My buddies are always saying, 'Hey, check this out.' And you turn it on and say, 'Oh, fuck, not this again.' I don't go looking for none of that stuff. You know, of course, I heard some of the live album."

He continued: "There's just no chemistry up there. They don't like each other. I mean, it's obvious. It's like a backup band with a guy out there in front. I bet they don't say five words to each other offstage.'

Hagar added: "What I saw was just so chemistry-less. VAN HALEN was always about chemistry in the early days. Early, that band was all about fucking chemistry, man. They were on fire. When I joined the band, they had great musical chemistry. We were friends, and we were on fire. We had so much fun, it should have been illegal. Now all that's gone."

Asked if he thinks he will ever speak to VAN HALEN guitarist Eddie Van Halen again, Sammy said: "I would hope so. Because that would be really sad if any one of us — I'll put myself in the same category — took this to our graves. That is not where you take things. I would rather go to my grave with no enemies left. I just don't think that would feel right. But who knows. Whatever. It's not my decision because I was the one they pushed out and tried to fuck over. To me, it's up to them to come back and say they're sorry."

He continued: "I'm not sorry for anything. I didn't do anything. Matter of fact, I did everything for that band. It was 100 percent my heart and soul and the best I had to give. All I did was make Number One albums and a lot of money. That's all I ever did for the band. Anything that's been done has all been in anger towards myself and now Mikey [former VAN HALEN bassist Michael Anthony] too. To me, they need to come and say, 'We're sorry.' And then our job would be to say, 'Great, you're forgiven.' Boom. Not for a reunion or anything like that. That's over, to me. That's completely fucking over. I wouldn't want to be in a band like that right now. I'd feel like a hypocrite for joining that band. How about that? There's a good quote for you. If I joined VAN HALEN right now, I'd feel like the biggest hypocrite in the world. And I'm not a hypocrite. "