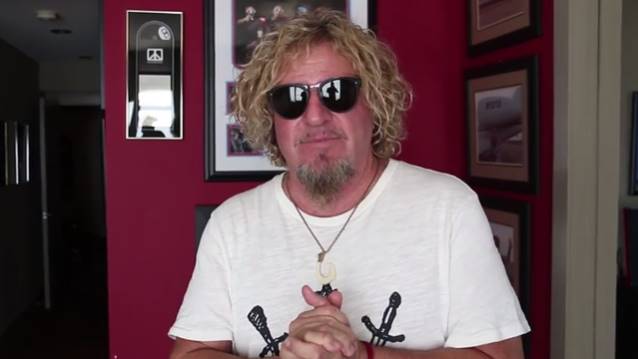 After waiting nearly a year, legendary rocker Sammy Hagar has finally gotten the keys to his brand new, custom-made $1.4 million Ferrari LaFerrari that he custom-ordered in white with black and beige accents while touring the Maranello factory for the first time.

Only 499 units of the LaFerrari — which boasts a whopping 950 horsepower — are being made every ten years.

Hagar said: "The car looked better than I ever imagined when I saw it. My anticipation to drive it was driving me crazy.

"When I finally took possession of the car today after all the red tape involved in a special car like this, [my wife] Kari and I put 100 miles on it. And what a crazy fun hundred miles it was! The car is much faster than I ever imagined. It sounds like a monster of some kind. It gets way more attention than I want. I'm getting used to it slowly before I really try to push I push it to my limit, which is way below the car's limit, I'm sure of that after today!

"I feel really special getting in and out of that car. I just want to look at it sometimes. I'm very close to being speechless. After chasing that Ferrari for a year finally taking possession, I'm humbled."

A video report from California ABC affiliate 7 News can be seen below.

Ferrari's first gasoline-electric hybrid model, LaFerrari has been described as "the most powerful street-legal Ferrari ever built."

Three days after the car's debut at the 2013 Geneva Motor Show, more than 1,000 people had put in requests to purchase the vehicle.