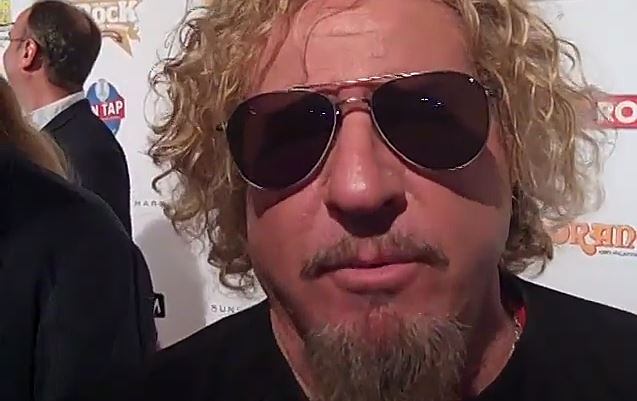 CHICKENFOOT frontman Sammy Hagar has clarified the recent comments he made to Rolling Stone magazine where he was quoted as saying that he thinks the rock supergroup is finished making albums. The band, which also included ex-VAN HALEN bassist Michael Anthony, RED HOT CHILI PEPPERS drummer Chad Smith and guitar hero Joe Satriani, has not made a CD in three years and Hagar told Rolling Stone that he didn't see one in its future. He explained, "I don't see any reason to make a new record… I mean, I love making music. But doing it on CHICKENFOOT's level means spending a half million on a record. We write and record for six months. It's a lot of work, and then to not sell many records, it's disappointing. I don't like being disappointed. I like winning."

Asked by VintageRock.com at last night's (Tuesday, November 4) Classic Rock Roll Of Honour event at the Avalon in Hollywood, California to elaborate on his Rolling Stone comments, Hagar said (see video below): "I would [make another CHICKENFOOT album], but it's just too much work right now. I mean, I love CHICKENFOOT — it's my favorite band, but I just don't see us getting together and making a record right now. Everybody's got so much to do. Joe is in freakin' Australia right now."

Pressed on whether he will personally continue to make albums, Hagar said: "Yeah, but I make kind of fun, easy things. CHICKENFOOT records are difficult, 'cause we've gotta get together, we write, and we work, and we write, and we work, and it's really, really tough. It's not like… I just did an acoustic record of a bunch of old songs — VAN HALEN songs, early Sammy songs, and I put them in an acoustic [format] — and it was fun, it was easy. I did it in a week. I like doing stuff like that. That's where the music industry is to me now. It isn't about going and spending a million records on a record and selling 125,000 copies, it's more about doing something like you like to do. 'Oh, I've got a great song. I'm gonna give it to the fans.' Or, 'I'm gonna put it up on the web site and make a video.' It's just about, for me, experimenting and having fun."