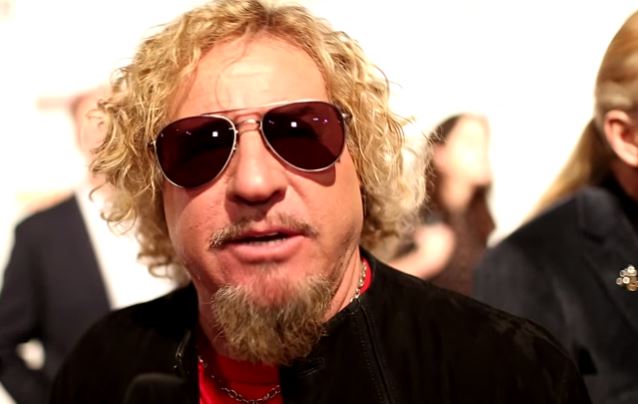 Ex-VAN HALEN singer Sammy Hagar claims that his former bandmates are trying to prevent him from performing songs that he originally wrote and recorded with the group.

Sammy, who took over the singing chores in VAN HALEN after David Lee Roth left the band, is widely considered the better singer of the two. However, Hagar never managed to dazzle the crowd quite like Roth did. After an 11-year-run with the band, Hagar was fired or he quit (depending on whom you ask).

During an appearance on Eddie Trunk's podcast, Sammy stated about VAN HALEN's seeming refusal to perform any Hagar-era tracks with the current lineup of the band: "I feel obligated [to play those songs with THE CIRCLE], because, listen, we sold 47 million records, whatever it was, together, we had all those Number Ones. Those are great songs 'Right Now', 'When It's Love', freakin' 'Finish What You Started'… Just keep going down the line, man. It's, like, these are great songs that need to be played for the people that supported it during the era. And it actually irritates me when those guys try to act like it never happened. I'm going, who would you shoot yourself in the foot like that? Just 'cause you can't do 'em anymore. Okay, but don't act like they're not good songs and you can't play 'em. And that they're not worth being played."

He continued: "If you wanna know the truth, I'm gonna tell you something that's gonna stir everything and everybody up so bad, you're not gonna believe it. Eddie and Alex Van Halen are trying to stop me from being able to even play those songs. They have had attorneys and people say, 'No, he can't play 'em.' Like, sometimes you need permission to play something, like on TV and stuff, and they say, 'No.' And they will actually fight legally to try to stop me. And I'm going crazy. I'm going, 'I'm gonna break these guys' neck.' It's like they're so jealous that they can't do 'em, and they don't want 'em to be heard, because they wanna pretend it never happened because of what they're doing now. And it's, like, when I just got wind of this, I'm going nuts. And so I've hired an attorney, and I'm gonna fight these guys to the end. Those are my songs. I wrote every lyric and every freakin' melody on every one of those songs. And for them guys to say that I can't sing my own songs, oh my God — I'm going crazy."

Asked how VAN HALEN could even have a leg to stand on, legally speaking, by trying to block Hagar from performing the songs he wrote and recorded with the band, Sammy said: "Because it's two different camps: my publishing is with one group of people — Mikey [Anthony] and I, our section of it — and theirs is with another. And, you know, an attorney can sue you 'cause they don't like the shoes you're wearing. You know what I mean?! They can start winding things up. So they're just trying to stop me. So when someone like a television show, or something, like I just did 'Live From Daryl's House', and [host] Daryl wanted to do 'Why Can't This Be Love?' and 'Finish What You Started'. And their attorney said, 'No,' [and] they put a cease-and-desist thing to where… So the network goes, 'Well, we don't have time to get in a lawsuit and find out who's right or who's wrong. We just can't do the songs.' And I jus thit the ceiling, man. So, anyway… It's that stupid and that childish and all that. But for THE CIRCLE, we will play them songs all day and all night, because nobody's gonna walk out on stage and tell me, 'Sorry, sir, you can't sing this song.' 'Cause, first of all, I'd beat their ass, and second of all, nobody's come on and do that, you know?!"

With Roth on the mic, VAN HALEN will kick off a 41-date North American tour on July 5 in Auburn, Washington.