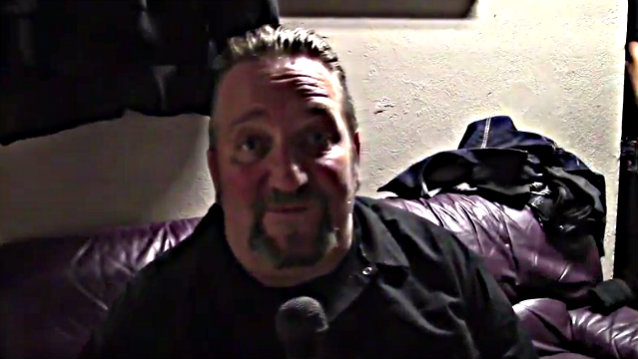 Speaking with Todd Owens of Hellbound.ca prior to the band's September 16 show at Slim's in San Francisco, California, where SACRED REICH was celebrating the thirtieth anniversary of its debut album, "Ignorance", Rind was asked about his thoughts on the current political situation in the United States. "I think everybody, it's pretty obvious to know what's going on," he said (see video below). "[It's obvious] there's an 'Oompa-Loompa' living in the White House [referring to Trump]. He's not a clown. He's like the 'It' clown [from Stephen King's novel and recent movie]. A clown is like [makes laughing sound]; what a joke. But that dude has got nuclear codes and has a lot of say in the things that go on and he's an embarrassment to our country. It's a sad state of affairs. Hopefully, what this will do is wake people up and make them pay a little more attention. We'll see."

SACRED REICH, known for their political commentary on efforts like "Ignorance" and its 1990 follow-up, "The American Way", would appear to be suited to release their first album of all-new material since 1996's "Heal" given today's political climate. Yet, the band has steadfastly resisted calls to release a new studio album. Rind did, however, leave the door open for new music:

"We have been pretty adamant about no new material, but now we're like 'We'll see.' If we have some cool stuff, then we will do it."

Asked whether Trump's polarizing presidency would drive SACRED REICH to write and record new material, Phil said: "You know, it's funny, everybody's, like 'There's so much to talk about now!' I go 'Look, there's always fucking bullshit to talk about.'"

Released a year after their 1986 formation, "Ignorance" remains the most popular SACRED REICH album. From there, SACRED REICH quickly became part of the second wave of thrash metal alongside TESTAMENT, DEATH ANGEL, DESTRUCTION and DARK ANGEL, earning praise for their politically charged brand of metal. Absent a hiatus from 2000 to 2006, the band remains a steady presence on the European festival circuit.

During the same interview, Rind was asked if, upon recording "Ignorance", SACRED REICH had any inkling it would still be active three decades later. "No, we had no idea," he said. "When we started, we were just happy to make a record. No one thought thirty years ahead. I mean, who knew? We are really super-fortunate to be able to still play and not having made a record in twenty-one years or toured the U.S. in twenty-one years is pretty cool."