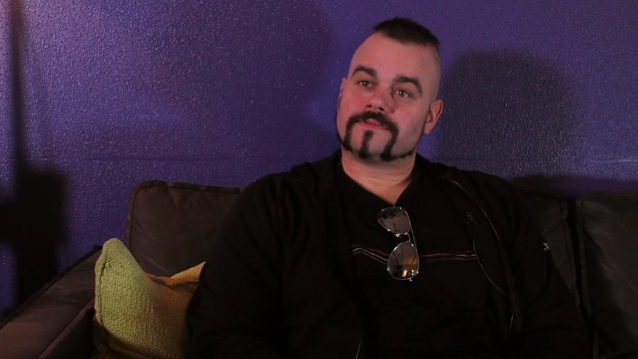 In a new interview with Holland's FaceCulture, SABATON frontman Joakim Brodén was asked how his opinion of the band's latest album, "The Great War", has changed in the six months since the LP's release. He responded: "I don't hate it anymore. When it comes to the musical part, I'm not the only one writing music, but I'm the main songwriter in the band, and I have been always. So I'm there for the writing of all the songs, I'm there for the recording, and I'm there for the mixing. And that's several, several months — up to nine months, from start to finish, and then writing lyrics and everything. And towards the end of that process, when you're mixing and you're listening to everything, you train your mind — even when you don't want to — but it is your job to find a problem with it. You train yourself to look for mistakes — musically and production-wise, anything that's a problem needs to be eliminated. So, basically, any album, at that point, towards the end, at least for me, becomes… I'm so tired of the songs; I've heard them all. And all the choices — was it the right choice to get that guitar solo a little bit louder? So, by the time we are done with an album and we go on a P.R. tour about it, we should be excited about it, [but] I fucking hate it. But now, it's been a year since we finished it, basically, and now I can actually start to listen to it somewhat objectively… You need to give it a rest for a while. So now I can listen to it a little bit more objectively and see what we did good or what we did bad."

SABATON's ninth studio album, "The Great War", was released in July 2019 and was highly praised by fans and critics around the world. A concept effort about the First World War, it reached higher chart positions than all previous SABATON albums, including No. 1 in Germany.