RUTHLESS recently signed a deal with Italy's My Graveyard Productions for the re-release of its 1984 "Metal Without Mercy" five-song EP. According to the group, "We will have a new cover with updated photos and a custom insert. It will be released worldwide. It will be available Febuary of 2009."

RUTHLESS's current lineup includes former DARK ANGEL guitarist Jim Durkin, who joined the band last fall. Durkin said, "Sammy D. [RUTHLESS vocalist] is an ol' buddy of mine for over 20 years! We have a lot of laughs together...and more than a few beers! They were one of the heavier bands around back in the day. DARK ANGEL and RUTHLESS played a lot of the same clubs in the '80s. So it seems like a nice fit. Their schedule is in line with mine so that I can work with them."

RUTHLESS was formed in 1982 by lead guitarist Kenny McGee and lead vocalist Sami D. The band released a Bill Metoyer-produced five-song EP, "Metal Without Mercy", on Iron Works Records in America, Banzai/Polygram in Canada and Axe Killer in France. A full-length album entitled "Discipline of Steel" followed in 1985. 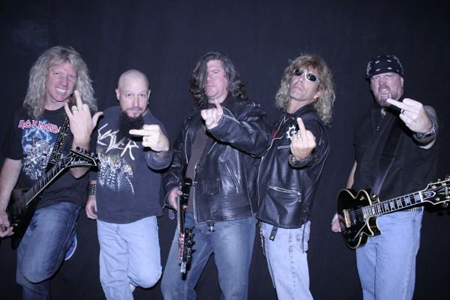